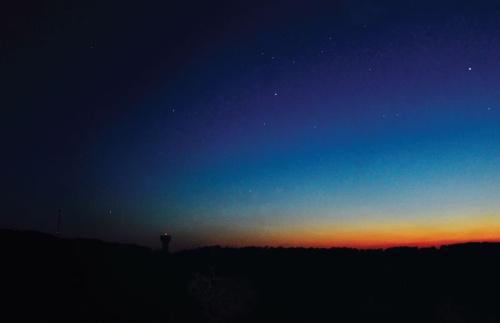 Dripping Springs became the first city in Texas to become dark sky- certified by International Dark-Sky Association, and since the Texas Hill Country has become a hotbed for dark sky preservation. Dripping Springs City Administrator Michelle Fischer said there are currently more active groups working on developing dark-sky ordinances or getting dark sky-certified in Texas, specifically the Hill Country, than any other area in the world.

While not officially certified, many Travis County cities have lighting ordinances on the books to preserve the night sky, including Austin, Bee Cave, Lakeway and West Lake Hills.

Lakeway City Manager Steve Jones said the city started as a destination for travelers wanting to look at the skies. As the city grew, he said ordinances were put in place to preserve that idea.


Why protect the dark sky?

In Dripping Springs, Fischer said the local effort originated from residents, some professional or amateur astronomers, who got together in the late ’90s to ask for lighting restrictions. Since, it has become a source of pride for most residents in the area, she said.

“It started initially with people concerned about losing the night sky and the stars at night,” she said. “But it’s so much more now that there’s more  knowledge about the health benefits and energy implications.”

Ordinances also limit the use of outdoor lights that burn at a higher,  “cooler” wavelength, she said. Lights that are cooler–measured as above 3,000 on the kelvin  temperature scale–hinder the body’s ability to produce proper amounts of melatonin at night, Cassidy said. Melatonin is a hormone that allows humans to achieve deep sleep at night, helps the immune system recover and can also slow the growth of cancer cells, she said.

River Hills, a small neighborhood on the south bank of Lake Austin, earned its dark-sky certification in 2017. River Hills Neighborhood Association Secretary Susan Silberman said that in addition to reducing the negative impacts of light pollution on human health and wildlife, the association views dark skies preservation in River Hills as the obligation of a “good steward.”

Silberman said the association’s efforts to promote a “grass-roots campaign” in River Hills rose awareness of dark-sky preservation in the area.

“Literally go everywhere you can, talk about [light pollution] as much as you can to as many people,” she said. “People are better versed, better informed, more interested and they seem more invested in it [now] because they see what could happen if we lost the night sky.”

Fischer said most area developers also accept the lighting requirements without much conflict once they learn about the benefits.

“What’s fascinating is that businesses and developers have taken it upon themselves to have [dark sky] information available online and to make it part of their marketing,” she said.

The Headwaters subdivision has a community park with a stargazing amphitheater, while Caliterra hosts star parties throughout the year, Fischer said.

Once certified, a place has to submit an annual report to maintain the status, Fischer said. Requirements include hosting dark-sky awareness events like star parties, making an effort to further educate the public of dark sky benefits, and documenting developments that have been built under the IDA light regulations.

Soon after Dripping Springs was named Texas’ first dark sky city, the cities of Wimberley and Woodcreek approached the city for help to get certified, which finally took place in 2018, Fischer said.

Fredericksburg, which is currently working on getting certified, is one of many in the area that based most of its light ordinance language on the Dripping Springs ordinances, she said.

West Lake Hills Mayor Linda Anthony said the city’s implementation of lighting ordinances in May 2014 was mostly due to complaints from residents.

“What we were seeing was an increasing number of new homes with a lot of landscape lighting and a lot of over-lighting,” she said. “A lot of people out here prefer the dark sky concept; they like the rustic natural look.”

To regulate light trespass, the city started to require outdoor lighting permits for new constructions, restricting the type, location and brightness of lighting, Anthony said. Outdoor lighting installed before May 2014 must be brought into compliance by 2024.

Lindsey Oskoui, director of the Bee Cave Planning and Zoning Department, said the preservation of dark skies is an overarching purpose of the city’s lighting ordinances. However, Oskoui said she would like to see the codes updated to address emerging technology in lighting, specifically LED lights.

“Once you have one dark-sky dot on the map, you need many more dots to connect them in order to stop that spread of light pollution,” Silberman said. “We are grass-roots. If we could do it, anybody can. Anybody who is motivated and incentivized can do it.”