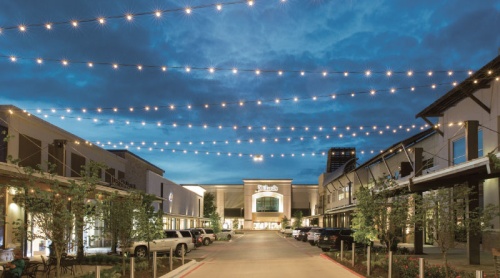 As the Hill Country Galleria celebrates its 10th anniversary, Bee Cave's economic strength continues to grow. What the mall's general manager calls a lifestyle destination is itself becoming a thriving community hub, a venue for 80+ events annuallly.

Since the day the Hill Country Galleria first opened in October 2007 it has emerged as a destination for shopping and entertainment as well as a gathering place for families, according to its general manager. It is also now widely considered a key part of the economic foundation on which the city of Bee Cave has been built, local leaders said.

“Ten years ago there weren’t a lot of opportunities in Austin for businesses that wanted to come to this region. That’s not the case now,” Bee Cave City Manager Travis Askey said.

The 2017-18 fiscal year Bee Cave city budget conservatively projects $9 million in overall sales tax revenue. Last year, the city brought in about $9.6 million (see graph). In the years before the mall was built, the entire Bee Cave city budget was around $2.4 million.

Much of the increase is due to the multiplier effect the Galleria has had on the area’s development, Askey said.

"Hill Country Galleria itself has accounted for between roughly 21 percent and 25 percent of total sales tax revenue since opening and it’s expected to perform about the same for FY 2017-18," he said.
"We don’t make assumptions that our sales tax [revenue] will continue to go up incrementally over time,” Askey said.

For comparison, Sunset Valley a similar small Central Texas city where the local mall is the main revenue source- brought in $4,826,780 in sales tax revenue in FY 2016-17 or nearly 96 per cent of city sales tax revenues according to online records.

Today there are a dozen or more ancillary businesses benefiting from the Galleria, such as Primrose School of Bee Cave.

“It’s a no-brainer [to have set up a business here]. Everyone knows where we are,” school owner Christy Black said.

A confluence of highways

In 2002 the village of Bee Cave was a semi-rural community in western Travis county with a population of fewer than 600.

Former Alderman Mike Murphy, the husband of longtime Bee Cave Mayor Caroline Murphy said the Galleria concept was then an idea and an opportunity whose time had come.

“What we wanted was an upscale community and infrastructure, Mike Murphy said. “With our small tax base we could not afford to build the roads we needed, City Hall, a park or anything. We were light years from being anything other than what I called ‘the last bait stop on the way to the lake.’”

A sense of urgency emerged after landowner Robert Baldwin was approached by Wal-Mart Stores Inc. to develop the 125 acres he bought in 1979.

Enter developer Christopher Milam, who partnered with Baldwin and proposed a two-phase development instead. First, around 2004, the village of Bee Cave approved the Shops at the Galleria development across Hwy. 71 where The Home Depot is today, Mayor Caroline Murphy said. The second component would be a multi-use shopping mall.

“[The Galleria] is a prime location and it deserved the highest and best use of the property,” Baldwin said. The final deal used state municipal development rules to rebate a portion of the sales tax to the Galleria generated by the development. Its owners in return provided infrastructure to support the growing tax base. In the Galleria’s case, that rebate will end after 15 years, or in 2022.

In FY 2017-18, the city plans to give $827,000 in rebates to the Galleria owners, according to the city budget.
“Cities benefit from the infrastructure you get, [roads etc.] that you pay back over time,” City Manager Travis Askey said.

To sweeten the deal, the developers also agreed to:

“Our whole goal was to drive property tax down as close to zero as we could,” Mike Murphy said. Why penalize our people that live, work and build here when our traffic problem was the [Austin] commuters driving on Hwy. 71?”

The initial Galleria plan in 2002 ran into opposition from Austin’s Save Our Springs Alliance and a group called Citizens for a Liveable Bee Cave. Former Bee Cave Alderwoman Marcy Holloway said the village had no watershed protection ordinance, and the project went against the ideals of Bee Cave's master development plan which discouraged an excess of commuter amenities.

“The community had not yet articulated its vision for the town and area. It really all started with The Home Depot approval [in 2004 in the Shops development along Little Barton Creek],” she said.

In October 2007, the Hill Country Galleria opened for the first time. Mike Murphy recalled on opening day, the Cinemark theater held a premiere of "Bee Movie." He recalled it had world openings in Paris; New York; and Bee Cave, Texas.

“We went in there just before sundown, watched the movie, came out in the dark and walked out on Main Street for the first time through the Galleria. That was what brought it home we had really done this,” said Mike Murphy.

Central Texas bankruptcy lawyer- turned-developer Adrian Overstreet and two partners placed a bid in the auction not expecting to win. The purchase deal closed Jan 28, 2010, Overstreet said he was unprepared for how hard it was to attract new national tenants in a mall where just about every other storefront was vacant, 160,000 square feet of office space had only one tenant, he said.

It would also take months to sort through boundary problems, existing lawsuits, and bringing the property into compliance with city and state ordinances.

“There were trees growing in the detention ponds. It was really a disaster,” Overstreet said. “[It needed] tender loving care, and we worked hard to fix it.”

Those fixes eventually included erecting three new office buildings, bringing in Whole Foods Market as well as moving a detention pond and re-engineering the former pond so it could be built on, the spot where Schmidt BBQ is now located.

By 2012 and millions of dollars in reinvestment–retail and commercial spaces were mostly filled, said Overstreet.

Hill County Galleria was not for sale the year a broker for the California State Teacher Retirement System arrived in Bee Cave and made an offer that was “something we could not say no to,” Overstreet said.

Property records show the sale was finalized Sept. 12, 2014, when the county valued the main Galleria property at about $170 million. The actual sale price remains private, subject to a confidentiality agreement between the seller and buyer, Overstreet said. The latest appraisal records show the primary mall property located at 12600 Galleria Parkway is valued at $220,740,323 million.

Two years later the mall’s new ownership and its property management team, CBRE, rolled out a plan to make the space more comfortable and easier to navigate that culminated with a re-opening in April 2017.

“Right away the new ownership was interested in learning about the community, past successes and challenges and started investing money right off the bat,” Galleria General Manager Jim Hopping said.

The decision was made to create three districts where similar businesses would be located more closely together. The most noticeable change Hopping said is the expansion of the Central Plaza in front of the City Hall and the library.

For the Bee Cave father of an energetic 3 year-old, the green space is an improvement.
“This is a really nice space for Christopher to run around on,” Josh Braden said. “I don’t have to watch him quite so closely [because] traffic must go around [the new green space and fountains].”

And the changes appear to be working for longtime tenants such as the owner of Fab’rik, who opened her doors in November 2007; the same fall the Galleria itself opened.

“We have loved the recent renovations. Providing shade and weather protection has been a huge asset,” Leslie Kempler said.

Ultimately, Mike Murphy belives the Hill Country Galleria has totally shaped the town.
"It set a standard for what we expected, that we were willing to make an honest deal if a developer was willing to be a good citizen,” he said.

As for the next ten years, Hopping said the "lifestyle destination" would to live up to early ideals of a vibrant town center with the "right mix" of retail, office, housing and most recently the nearby Sonesta Bee Cave Austin Hotel, he said. The hotel is a development that itself is contributing significantly to the city’s sales, liquor and property tax revenue, records show.

But for Bee Cave’s city manager, the future is best met with caution, referring to the competition today that popular online delivery companies pose to the "sticks and bricks" retail marketplace.

“If [the Galleria] was just an open pasture like it was in 2004, what would be planned for it would be very different [than what’s there now], Askey said.” My approach is a little different. I live in the present.”