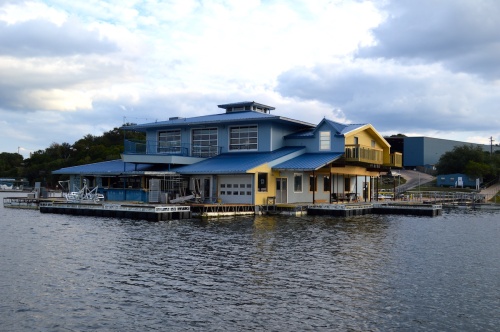 The Johnny Fins building, which currently floats at Hurst Harbor, will float to Point Venture Marina in late December or early January.

The Gnarly Gar, located at 18200 Lakepoint Cove, Point Venture, will close its doors for renovations at 6 p.m. Nov. 27.  In 2017, the restaurant intends to take over the floating building that was the former Johnny Fins restaurant.

“A new building has been discussed for many years and we’re very excited about the prospects of the change,” Gnarly Gar owner Todd Hynes said. “We feel like this could change the entertainment landscape in of Lake Travis.”

The Johnny Fins building, which currently sits at Hurst Harbor, will be transported down the Colorado River to its new home at the Point Venture Marina in late December or early January, Hynes said. The building offers the Gnarly Gar a larger kitchen and upstairs seating, which will be used for catered events, he said.

“We’re going to have a new menu,” Hynes said. “It will be the same style but with a nice big kitchen we’ll have the opportunity to introduce some new dishes. We’re currently looking to hire a new chef and we want them to be part of the process.”

He said he expects the Gnarly Gar to reopen in the new building in spring 2017.