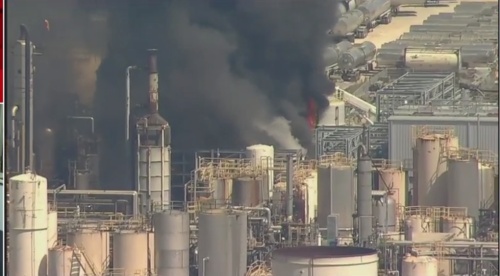 The photo was taken from an ABC 13 aerial video of the KMCO chemical plant fire in Crosby.

Emergency crews are working to control a chemical plant fire at KMCO at 16503 Ramsey Road, just off the Crosby Freeway in east Harris County, according to Community Impact Newspaper partner ABC 13.

One person died at the scene, according to the Harris County Sheriff's Office. Two people were taken to area hospitals by Life Flight.

A shelter-in-place has been ordered for all residents within a 1-mile radius of the KMCO plant fire, according to the Harris County Office of Homeland Security and Emergency Management Twitter account.

A number of school districts had sheltered students in place following the blast. Crosby and Sheldon ISDs have since lifted those procedures. Channelview ISD announced it will be releasing students on their regular schedule but will continue to monitor air quality.

One worker told ABC13 a leak was detected just before the blast. He said workers were scrambling out of the area, even crawling under fencing to get away.

Harris County Sheriff Ed Gonzalez said via Twitter that the preliminary information is that a transfer line ignited in the area of a tank with isobutylene, and the tank caught on fire. An adjacent storage building with solid goods also caught fire. Firefighters are working to contain it.

The Texas Commission on Environmental Quality has also sent emergency response personnel and redirected one of its air quality-monitoring vans to the vicinity.

The TCEQ issued a statement from KMCO President and CEO John C. Foley:

"There was an incident resulting in an ignition and fire today at KMCO, LLC in Crosby, Texas. We are deeply saddened to confirm at this time that there have been injuries and one fatality. Those injured have been transported for medical treatment. Our hearts and prayers go out to the individuals involved, as well as our first responders, employees and our community. We have activated the company's emergency response team and incident command center. We are working with local first responders to extinguish the fire. We will give another update as additional information becomes available. We apologize for any inconvenience to residents in the vicinity. The wellbeing of our people, neighbors and the environment remain our top priorities."