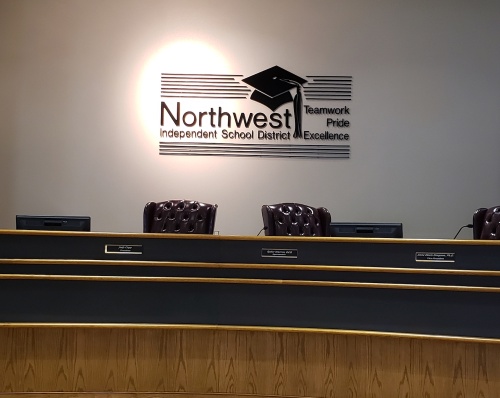 The Northwest ISD board of trustees at its June 24 meeting unanimously approved the district’s fiscal year 2019-20 budget and expects to operate on a budget deficit during the upcoming fiscal year.

The district is forecasting $310.83 million in revenue for fiscal year 2019-20. General fund revenue will make up the largest portion at about $221.37 million of the district’s total revenue. NISD approved $242.48 million in general fund expenditures, which include general operations of the district.

And capital projects funds will equal around $752,073 of the district’s 2019-20 fiscal year revenue. In addition to that revenue, NISD has $199 million in authorized but unissued bonds for projects. Expenditures for the capital projects fund are budgeted at $212.25 million and will include acquiring, building and renovating district facilities.

NISD officials attributed the gaps between the district’s revenue and expenditures to its rapid growth and building and updating facilities to accommodate that growth. During the 2019-20 school year, the district plans to add 992 new students.

“I think the expenditures you approved tonight will go a long way to meet the needs of our students and teachers,” Superintendent Ryder Warren said.

Warren added the budget, including revenues and expenditures, will continue to be amended throughout the school year as the district better understands the impacts of House Bill 3. The bill, which was signed by Gov. Greg Abbott on June 11, includes $11.6 billion for school finance, including $6.5 billion for new public education spending and $5.1 billion for lowering Texans’ property taxes.

Some of that funding will be distributed to NISD, but the district is not sure how much it will receive.

Though it did not approve a tax rate at its June 24 meeting, NISD’s board discussed a proposed rate of $1.42 per $100 valuation. Of that rate, $0.97 will be dedicated to maintenance and operations, while $0.45 will make up the district’s interest and sinking tax rate, which is used to pay off debt.

The district’s board of trustees is set to vote on the tax rate at its Aug. 26 meeting.

According to district officials, NISD is largely self-funded, meaning most of its funding comes from local sources, mainly local real and personal property taxes. During fiscal year 2018-19, those taxes made up 87% of the district’s total revenue.

State and federal revenues made up the district’s remaining revenue during fiscal year 2018-19.

In the upcoming fiscal year, about $279.29 million of the district’s revenue will come from local taxes along with $21.46 million from state revenue and $10.07 million from federal revenue.