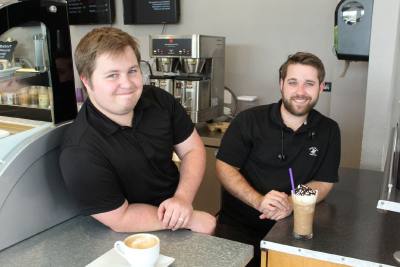 After working in chain and independent coffee shops, Heath Miller (left) decided to open his own concept. He teamed up with his brother Luke (right) to open Axiom Coffee in 2018.

When opening Axiom Coffee, Heath and Luke Miller said they designed the business to be a community “happy place.”

The brothers and co-owners of Axiom first laid the foundation for the business in 2014. Heath had worked for chain and independent coffee shops and wanted to build a concept that served more than coffee. His aim was to operate a business that also served its community, he said.

He teamed up with Luke, and the two began planning and saving for their venture. They started construction of Axiom in 2017 and officially opened the shop in November 2018.

Customers at Axiom can buy bags of coffee beans as well as hot and cold beverages, breakfast and lunch foods, and pastries and other snacks. In the future, the Millers plan to expand their offerings to include keto-friendly and gluten-free items.

Luke, who was previously in the construction business, built out Axiom’s interior. Of the shop’s 3,000 square feet, around 2,600 square feet is dedicated to seating. The brothers designed Axiom to have an upscale and open feel where community members can study or work for long periods of time without worrying about buying a drink or food.

Axiom’s space is also used for events hosted by local charities and organizations, such as Community Storehouse and Sunshine Spaces.

Long term, the brothers want to provide more open space with outdoor seating and a garden.

“We wanted a place where you could meet ... and it’s a step up from a place that’s loud and quick and fast,” Luke said. “We wanted to create a venue that people love.”

In addition to serving northeast Fort Worth and surrounding communities, Heath and Luke are working through Axiom to serve poor students in Honduras. Around 80% of the shop’s coffee beans are sourced from Rancho Ebenezer, a charity in Honduras that harvests and sells the beans.

Axiom Coffee buys coffee beans from Rancho Ebenezer to help fund the organization’s yearly budget. With Axiom’s support, the charity does not have to worry about fulfilling yearly sales to fund their operations, Heath said.

The agency provides a variety of insurance services in Roanoke and the surrounding areas.

Owner Andrea Cacho-Gigante chose the name Del Campo, which means country or rustic in Spanish, to honor her grandmother.

Roanoke Trading Co. 'for the people who are hard to shop for,’ co-owner says

“Our store has one-of-a-kind finds. We work really hard not to have what everyone else does,” co-owner Laura Hanley said.

The business expects to start seeing customers in June.

Deborah Peoples and Mattie Parker will face each other in the June 5 runoff election for Fort Worth mayor.