Standing their ground: 5 residents share why they won't leave their flood-ravaged neighborhoods 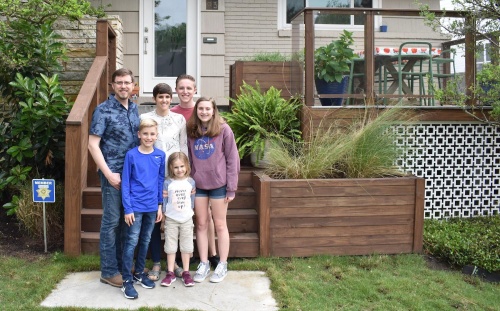 A crown of thorns was blooming in the back yard of Cate Ebbs’ Braeswood Place home in the days leading up to Hurricane Harvey.

After the storm flooded her home, Ebbs stayed in a hotel for a week before moving into a rental house for seven months, then into a garage apartment for six months before finally moving home. All the while, she kept her crown of thorns with her.

The plant, along with several cuttings of it that Ebbs grows, is still in bloom now, resting on the planks of a patio deck that sit several feet above ground, along with the rest of Ebbs’ home to keep the waters from displacing her again. Hers is one of 238 homes in the area that have been elevated since Harvey.

Of all the methods being used to stop homes from flooding, including widening bayous, making detention ponds or replacing underground storm sewer lines, Bellaire City Manager Paul Hofmann said this approach has had the best results, with less than 2% of homes at or above the flood standard having received flood damage during Harvey.

“It is abundantly effective, and Harvey proved it,” Hofmann said. “These elevation standards, the regulatory approach, is really effective. It works.”

Home elevation is the option that Fabia Hill, a resident of Braeswood Place, took after the waters of Harvey came up over 2 feet in the home she and her family bought in 2015.

Rebuilding the same house was not an option, and her husband found that elevation was the most cost-effective option for them, she said. All in all, the process of elevating the Hills’ home 48 inches above the ground cost $90,000. A third of the cost was covered by Hill’s flood insurance, yet the money did not come until months after the construction was complete and the Hills had already paid.

“We used some of our own funds and had to borrow money from family, especially because we wanted to get started immediately,” Hill said. “It’s very stressful because all of a sudden your life moves around insurance claims.”

Throughout it all, Hill and her family decided to stay.

“Leaving the neighborhood wasn’t really something we wanted to do,” Hill said. “And it’s really the wrong time to decide that you don’t want your particular lot just after an event like that. We couldn’t have afforded to buy a nicer or more elevated house in the neighborhood.”

Ebbs, who has been a Houstonian since 1985, experienced flooding in her home during both Hurricane Allison and Harvey.

“I lost all of my furniture, all of the couches, all of the beds. [The water] just overwhelmed everything, and it came so quickly,” Ebbs said.

Despite the damage to her home, she said she did not want to move.

“It’s a fantastic neighborhood,” Ebbs said. “I love it because I can just walk a block and a half and be at the bayou.”

To pay for the repairs to her home as well as the $110,000 to elevate it, Ebbs relied on Federal Emergency Management Agency grant money along with some inheritance money, which saved her from having to take out another mortgage.

Ebbs said because of the elevation work completed on her home, she is not concerned about her home flooding a third time.

“I’m not worried about it at all,” Ebbs said. “The other night, when we had a storm, I didn’t even get out to check. When it rained before, even before Harvey, I would get out and see if it was going to flood.”

Instead of lifting a home above the ground, some decide to tear down and rebuild. More than 800 homes have been demolished in Houston city limits around Bellaire, West University and Meyerland since Hurricane Harvey, according to city permit data.

Randy and Susan Farber, homeowners in Meyerland who have lived next to Brays Bayou for 15 years, decided to do just that after their home flooded for the third time during Harvey.

“The first flood we had about 2 1/2 feet, and the second flood we got about a foot and a half,” Susan said. “We were supposed to move back in the Wednesday before Harvey.”

“Then we had 4 feet of water,” Randy said, pressing the ridge of his hand to his side, showing how high it got.

Randy said they did not want to leave because of the location of their home and the investment they had already put into it.

“The cost to build versus the cost to go out and buy and the cost to lift were all so comparable that it just made sense, to me, to put the money into it and rebuild,” Randy said. “Fortunately we had the cash to get a loan and build.”

Like the Farbers, Braeswood Place homeowner Eileen Debo went with demolishing her home, though the process of going through insurance, loans and grants was not easy.

“If somebody does not have experience negotiating the concepts, they feel hopeless,” Debo said.

She and her family are no novices to flooding, having lived there since 1987.

“Then Harvey comes in and redefines the whole game,” she said.

When Debo and her husband had to decide what to do with their home after it sustained 19 inches of flood water during the storm, they considered elevation.

“It would have cost $152,000 for raising a 68-year-old house 5 feet above the ground,” Debo said. The house itself was worth less than $20,000, according to the Harris County Appraisal District, she said.

Debo has since demolished her home and is waiting on a permit to begin construction on a three-bedroom, two-bathroom home on their lot.

There are others who do not know what to do with their flood-damaged homes. Lynne Skinner, a real estate agent who moved to Bellaire in 1984, said she does not plan on elevating or rebuilding her home after it was flooded during Harvey.

“I’m not rebuilding my house. I’m not fixing it up.” Skinner said. “I’m a residential Realtor, and I know that flooded houses have a negative connotation, and why put money into something when the value’s in the dirt and not in the house?”

Skinner said her home had 4 or 5 inches of water in it for days, and after the cost of damages was tallied up, her options were limited.

“I’m completely tearing my house down,” Skinner said. “Financially, I just think it’s too much money to spend on an architect and have great plans and all of that.”

Despite getting offers to buy the land that her damaged home rests on, Skinner said she was still too attached to the property and could not bear to sell it yet. For now, she is leasing a home in Meyerland.

“I love Bellaire, and I hate that I’m not living over here anymore,” Skinner said. “It is a very eclectic, interesting small town. It’s multicultural, multinational, multi-everything. Everyone is really accepting.”

With additional reporting by Matt Dulin and Emma Whalen