The last of Montgomery County’s projects funded by the 2015 road bond are wrapping up in Precinct 2, and talks of a new bond have been tabled because of the COVID-19 pandemic, Montgomery County Precinct 2 Commissioner Charlie Riley said.

Paired with the state facing an estimated $4.58 billion budget shortfall in fiscal year 2021, officials said transportation projects could see funding challenges in the next few years as Texas’ economy grapples with the effects of the pandemic.

“We can expect to see those impacts in the next two to three years. How significant they will be, I don’t think anyone quite has a handle on that yet, but there will be a dent because of the revenue forces that fund those projects,” said Allie Isbell, the transportation manager for the Houston-Galveston Area Council, a metropolitan planning organization working with Precinct 2 on a mobility study.

In addition to the last of the improvements funded by its $280 million road bond approved in 2015, new mobility and thoroughfare plans are also taking shape in Montgomery County.

Montgomery County Judge Mark Keough previously said in February that discussion of a new bond could take place in late 2020 or early 2021 after the county’s thoroughfare plan is updated.
RELATED STORIES

Keough said the county would need a combination of state and federal dollars with local matching to address its growth-related mobility needs. Keough’s office declined to comment for this article.

“We were just doing so well,” Riley said. “We all kind of had in the back of our mind that once we get these road projects [from the 2015 bond] done ... we were possibly going to ask to go out for another bond. ... This is just not the time to even be thinking about going out for another road bond.”

Nearly five years after the passage of the county’s 2015 road bond, many of its dozens of planned projects are built or moving toward completion. Precincts 2 and 4 are also developing their own mobility plans to chart the area’s needs, and a countywide thoroughfare plan update is expected in summer 2021, a representative from Brown and Gay Engineering said at the Oct. 13 Commissioners Court meeting. 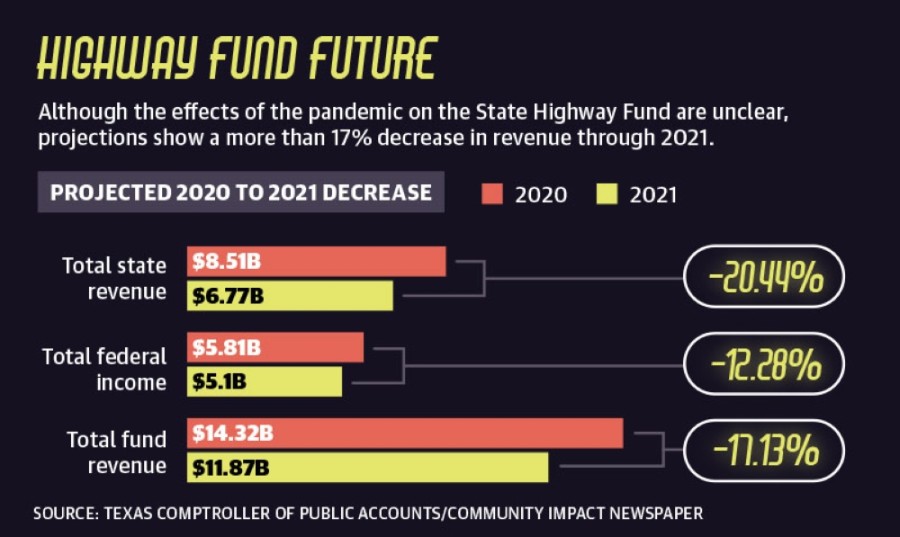 Riley said the Precinct 2 mobility plan, being done in partnership with H-GAC and engineers, is a first for the precinct. He said he estimates the study, which will look five to 15 years out, will take about two years.

“They will look at state roads, county roads. We’ve even got them looking into some of the city roads ... to see what could be projected in the future that we may be needing to make plans [for] instead of waiting until ... we’re so far behind the eight ball that we can’t catch up,” Riley said. “Just think: We’ve never had [Hwy.] 249 looked at other than, ‘We’re going to build this road through here.’”

In Precinct 2—which •Community Impact Newspaper• previously reported was allocated $64 million through the 2015 bond—several road projects funded by the bond are now complete, including Grand Pines Road, which opened in May, connecting Nichols Sawmill and Sanders Cemetery roads.

With the cost savings from completing projects under budget, Precinct 2 has about $10 million remaining from the bond allocation for projects not included on the initial list, although an exact amount was not yet available, Riley said. Among the additional projects, Riley said he is eyeing widening the lanes on Nichols Sawmill Road from Butera Road to FM 1774. Although Precinct 2 is waiting on cost estimates and construction proposals, the project would include two 12-foot lanes, an 11-foot center lane and 8-foot shoulders as well as widening the bridge over Walnut Creek. Currently, crews are widening Nichols Sawmill Road from Grand Pines to Butera.

“We could complete the projects on the bond list plus add this project to it; we will be doing pretty well over in Precinct 2,” he said.

Precinct 2 also allocated bond funds for initial work on the Magnolia Bypass—a proposed loop around the north side of Magnolia from the Hwy. 249 extension to west of FM 1774. Riley said the county is moving forward with surveying and purchasing the right of way.

While the bulk of the project is unfunded, construction of the route is included in H-GAC’s 2045 Regional Transportation Plan, a long-range plan prioritizing regional projects to receive funding, and a construction timeline is therefore unknown.

While local officials continue planning for the roadway networks, agencies such as the Texas Department of Transportation and H-GAC are examining possible paths forward for some of the county’s most traveled roads as the population rises.

H-GAC Transportation Planner Carlene Mullins said improvements to the county’s east-west and north-south mobility by the mid-2020s are keys to addressing its ongoing growth and mobility needs.

“That’s one of the things that I believe the county needs to work on: expanding their existing roadway network so that they have alternatives to the existing major roads,” she said. “There needs to be some alternative routes developed in the county, not only for safety point of view, but also to accommodate the features of the county. ... You need to create a network to work together to be able to accommodate future growth in the region.”

Projects around Magnolia were selected by H-GAC through its 2021-24 Transportation Improvement Program—a regional plan prioritizing road projects to receive local, state and federal funding. A $29.7 million project widening FM 1488 from the city of Magnolia to Waller County is slated to commence in December, according to TxDOT information. The plan also includes a $62 million project to widen FM 1488 from FM 1774 to FM 149 in Magnolia.

TxDOT spokesperson Emily Black said the agency has had a recent focus on east-west corridors. TxDOT’s access management study of FM 1488 from FM 149 to I-45 concluded this spring, resulting in the recommendation of more than $19 million in enhancements within the next five years.

“Anything ... east and west that we can improve, I think that’s what’s on everybody’s radar,” Riley said. “All of those roads are at capacity, or near capacity or overcapacity, and those are the ones that we’re going to have to look at to try to expand before we try to put something new on the ground.”

While state funds will be involved in construction along FM 1488 and other planned projects, uncertainty surrounding the pandemic’s effects on the next several years of state finances and budgeting could affect the status of necessary improvements.

According to information from the office of Texas Comptroller Glenn Hegar, most categories of state tax collections decreased this spring and summer—including the motor fuel, severance, and sales and use taxes that feed into the State Highway Fund.

In total, the State Highway Fund—which accounts for the majority of TxDOT’s funding—is projected to see its state share of revenue fall 20.44% and its federal income reduced more than 12% from 2020-21, resulting in an overall 17.13% drop in fund revenue.

Those decreases are likely to play into TxDOT’s plans for future infrastructure work throughout the state. The agency said it is considering the long-range effects of the pandemic.

“At this time, TxDOT is closely monitoring revenue information shared by our state comptroller, anticipating various budget scenarios of the 87th [2021] Texas Legislature, and working closely with the Texas Congressional delegation on possible federal funding impacts. With any revenue impact, TxDOT will fully assess future plans and adjust accordingly,” said Veronica Beyer, the department’s director of media relations, in an email.

Andrea French, the executive director of the infrastructure funding coalition Transportation Advocacy Group-Houston, said in addition to evaluating the revenue lost due to COVID-19, TAG and other experts are considering ways to boost funding—such as fees for alternatively fueled vehicles or an inflation-adjusted gas tax—to support future projects as state and federal recovery moves forward.

“We understand there are other priorities this [legislative] session, but our argument is one of the things we need to work on is jobs and bolstering our economy, and a great way to do that is to invest in transportation,” French said.