As the Tomball and Magnolia area continues to experience residential growth, local public safety providers have been challenged to plan ahead to meet future needs. These plans include adding staff, upgraded equipment and new stations. (Photo courtesy Tomball Fire Department)

As the Tomball and Magnolia area continues to experience residential growth, local public safety providers have been challenged to plan ahead to meet future needs. These plans include adding staff, upgraded equipment and new stations.

“You can see just driving through the community; you can’t drive more than a mile without seeing a new subdivision under development or a new commercial property under development,” said Brian Bayani, executive director of Northwest Community Health.

Meanwhile, Harris County ESD 15, which provides fire services outside of Tomball’s city limits, is planning to break ground on a new station in January, board President Buddy Roth said.

The city of Tomball is poised to see 2,100 new homes within five years, and 18,000 future lots are planned for Magnolia, Community Impact Newspaper previously reported.

Bayani pointed to call volume as an indicator of how rapidly the area is growing. Between 2017-20, Northwest Community Health received almost 700 more annual calls for service, a 20% increase. 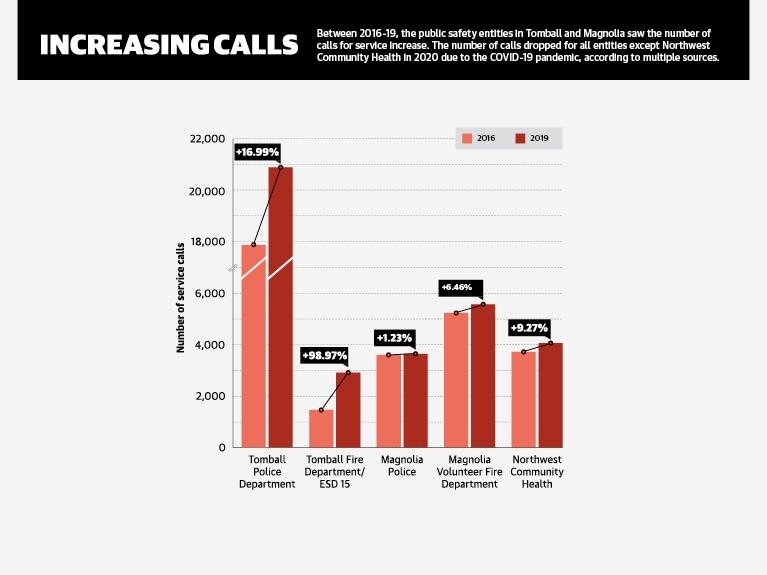 Magnolia Police Chief Kyle Montgomery said although he is aware of the growth coming, he believes there is only so much the city can plan for.

“We’ve never experienced growth like this,” Montgomery said. “There is a little bit of uncertainty because you don’t know what new crime trends may come about.”

While department officials do not know exactly how their roles will change, they are adding personnel and addressing response times.

From 2010-20, the total population within Tomball ISD’s and Magnolia ISD’s boundaries grew more than 50%, adding more than 57,000 residents in both districts, according to U.S. Census Bureau data.

“We’re intended to grow with the city,” Tomball Fire Chief Joe Sykora said. “With the [increased] population we have, the more houses that come up out of the ground, the risk grows.”

Tomball’s fiscal year 2021-22 budget includes $345,329 to fund three battalion chiefs for the fire department. Sykora said these chiefs will take command at fires and have administrative duties but ultimately will ensure the city has 24-hour fire response.

While Tomball police will not be adding new officers next year, Chief Jeff Bert said he is making sure his officers are prepared through proper equipment and technology, such as new radios and Tasers, costing $48,000 and $33,700, respectively. 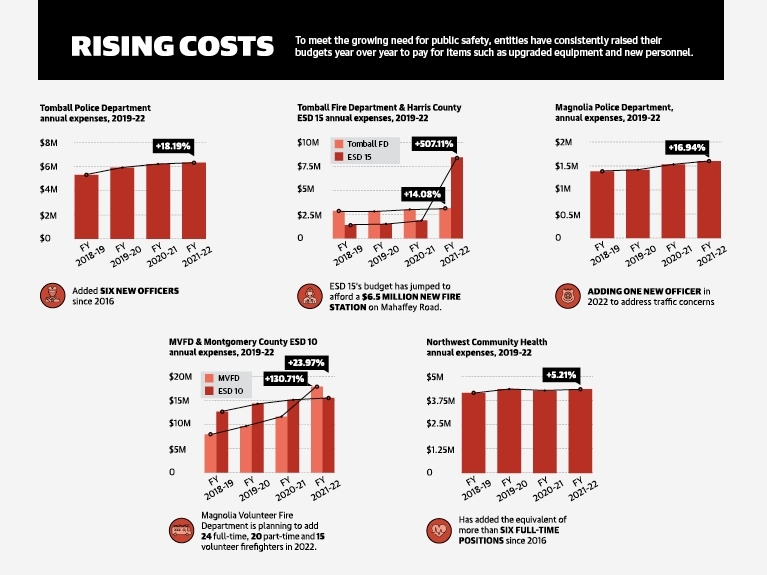 “I’m focused on making the team that I have excellent, efficient, effective and professional,” Bert said.

As cities have grown, the roles of law enforcement have changed, Montgomery County Precinct 5 Constable Chris Jones said. Jones said his department, whose coverage area includes the Greater Magnolia area, used to focus on civil crime but has shifted to include narcotics and intoxicated driving incidents.

“We found out that there are a lot of things with the sheriff’s department being so busy that were getting missed,” Jones said.

The completion of Hwy. 249 from FM 1488 to FM 1774 in Plantersville has brought new subdivisions and more residents, which bring traffic concerns, Jones said.

“We don’t see the growth in Montgomery County ending anytime soon,” he said. “If we can get a couple of guys a year to keep up with the growth, it’ll always put us ahead of it and not behind it trying to catch up.”

Magnolia’s FY 2021-22 police budget includes $69,545 for one additional officer, which Montgomery said will focus on traffic and mobility concerns. He said increased traffic—including clearing up crashes efficiently, ensuring drivers are driving the speed limit and stopping impaired drivers—is one of the department’s main concerns.

“Until the roadway infrastructure gets up to where it needs to be, traffic mobility is going to be the biggest issue we have to focus on,” he said.

In Tomball, Bert said traffic accidents are one of the most time-consuming issues for his department. DWI arrests have doubled since last year, he said.

“I’m focusing on the traffic driving behaviors that cause very bad accidents,” Bert said. “[Tomball] is a small sleepy town, and I want to keep it that way.”

Another key issue departments must plan for is ensuring that response times stay low, Sykora said. The optimal time between when someone calls 911 and when emergency services arrive is six minutes, Sykora said.

In Tomball, Sykora said there are some areas of the city, such as near Zion Road and FM 2978, where the response times are already in danger of becoming too high.

“Right now we are just teetering on the edge of not meeting [response times] in that area, and as roads continue to get more congested, that does extend responses,” Sykora said.

Roth said as a result of response time concerns, Harris County ESD 15, which contracts with the Tomball Fire Department, budgeted $6.5 million in FY 2021-22 to build a new station on Mahaffey Road.

“The only way you get the response time down is get the station and the equipment closer to where it might be needed,” Roth said.

Bayani said Northwest Community Health’s fourth ambulance will likely be stationed there. The department has three full-time ambulances, but a •fourth, which will cost up to $875,000 for the vehicle and salaries, is necessary to provide adequate services, he said.

“With call volume increasing, it’s become important for us to put another ambulance in service not only to manage the call volume, but as the population pattern changes, a lot of residential growth has occurred in the unincorporated parts of the county,” Bayani said.

ESD 10 board President Larry Smith said a priority as the department transitions to providing fire services rather than contracting with the MVFD is to keep all nine stations open 24/7. ESD 10 previously closed two of its stations on a rotating basis.

The ESD’s contract with the MVFD is ending in January, and Smith said a long-range plan will likely include a new fire station, substation and equipment.

Bayani said he believes preparing for growth is key.

“Our responsibility is to be responsive to [change] and make sure we’re providing the same or better level of service as the community grows and not be caught trying to play catch-up,” Bayani said.