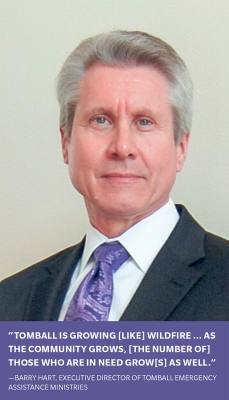 TEAM was founded in the 1980s and has grown to offer financial aid, a food pantry, a resale shop and other emergency assistance to residents in need via the Tomball Benevolence Network—a network of local businesses, churches and professional services launched in April 2018 providing clients free or low-cost services.

Hart is a Richmond resident and native to Houston. He attended Texas A&M University, earned a master’s of business administration at the University of Houston and has worked with Inter-Varsity Christian Fellowship and as the director of research and analysis for Fiesta Supermarkets prior to TEAM.


What experience do you bring to TEAM?

About a year after [my wife and I] were married, we were asked to go on staff with Inter-Varsity [Christian Fellowship] and to move out to El Paso, Texas. ... [We] did that for six years and then came back to Houston, and [I worked] with Inter-Varsity at Rice University. While I was there, I was working on an MBA at the University of Houston with the anticipation of moving into the business arena out of the ministry role. … I started working at Fiesta [Supermarkets] in the corporate office. … I was there for 21 years, but all along the way, [I] still [had] a heart for ministry, and I was always involved in the local church. ... I can certainly bring my business acumen to an executive director level of an organization, which I think is a good fit and will be valuable, but I love the idea of being in Christian ministry also.


What drew you to TEAM?

A friend of mine [Rocky Alexander] is on the board of TEAM. When he found out about what I was looking for [after I left Fiesta], and knowing that the executive director was going to be retiring, we started to have a conversation about if I was a good fit for TEAM and if TEAM fit the types of things I wanted to be involved with. ... What TEAM represents is at the root of what I’m passionate about. I believe that the church’s role to be active in its community is important. … I also believe that communities need to be responsible to care for their own, and that’s what TEAM is about. It’s about bringing partners together—both business, nonprofit and individuals—to serve those who need help in the Tomball community.


What is your vision for the organization?

Tomball is growing [like] wildfire like much of Houston. As the community grows, [the number of] those who are in need grow[s] as well. … As that need grows, then our ability to take on that increased need is going to need to be established. It’ll mean things like continuing to improve the operations in our resale shop ... [The resale shop is] one of the forms of funding for our ministry, so growing that aspect. We could see expanding the scope of our assistance ministry. We’re open two days a week; we could see somewhere in the near future opening up on Wednesday, [too, and] growing the Tomball Benevolence Network.


What kind of services are most often provided?

Food would be probably the larger piece in terms of how we’re able to service clients on a more regular basis. … We invite clients to come every three to four weeks if they need it that often in order to get food to help provide for their families. If they can do that, then they can save that grocery dollar and have it available for other things. We’re truly providing [food] for folks who are in a financial crunch.


What sticks out in your first months with TEAM?

One of the things I’ve been impressed with regarding TEAM is there are very few of us who are paid. I am profoundly impressed with the number of volunteers that we have and the energy and commitment that they portray to TEAM. But it’s more than to TEAM; it’s to the Tomball community. They really do care for their community, and it’s representative in the time and energy they give here.
SHARE THIS STORY

City council also approved the first reading of rezoning of the property.

Occupancy surpassed 90% for office, industrial and retail properties in the Tomball and Magnolia areas as of mid-November, an increase year over year in all three sectors.

The Tomball shop is in the early stages of construction.