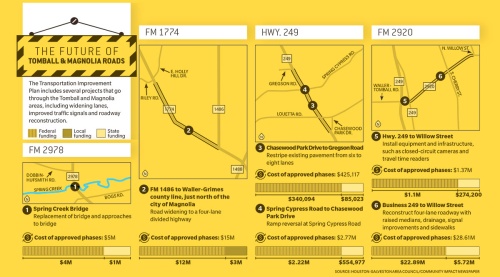 The Houston-Galveston Area Council approved its 2019-22 Transportation Improvement Plan in May, and several Northwest Houston-area projects have been prioritized.

The TIP, which is updated every two years, includes 309 planned projects, said H-GAC Senior Transportation Planner Jim Dickinson at a May meeting of the H-GAC Transportation Policy Council. He said $7.2 billion has been prioritized for 47 funding entities.

“[The TIP is] a four-year program of transportation projects, which require federal action, funding and/or environmental permits,” Dickinson said. “It’s the implementation device for the long-range Regional Transportation Plan.”

Projects are prioritized to receive funding at the federal, state and local levels, Dickinson said. H-GAC does not fund projects itself.

In the greater Tomball and Magnolia areas, projects target Hwy. 249, FM 2920 and several other local roads. Improvements range from adding lanes to relieving congestion to reconstructing bridges as well as roadways. However, H-GAC information does not include proposed timelines for the projects.

“It is essentially the same as the first draft that was previewed [in May],” Dickinson said.

The next step for TIP projects entails awaiting approval from the Texas Department of Transportation, which was sent a copy of the plan June 19. TxDOT is the entity that would fund portions of many of the projects in the plan or fund the matches necessary to obtain federal funding.

H-GAC will also soon begin the process of seeking proposals from local governmental entities and project sponsors for projects to include the next update in 2021. However, at its July meeting, H-GAC pushed back the date to submit projects to later this summer.