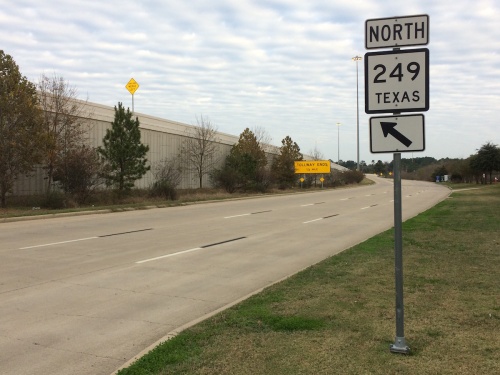 Construction began in February on the Tomball Tollway extension from FM 2920 to Spring Creek.

Montgomery County officials announced Friday that Varde Partners—owners of the Woodard Tract located near FM 1486—donated 255 acres of right of way for the construction of Hwy. 249, a gift that is expected to allow the Texas Department of Transportation to begin construction on the route in Montgomery County.

The land donation, stretching from east of FM 1486 to the Grimes County line, is valued at $5.1 million, according to a statement from the county.

“This major donation was made possible in part because of the county’s commitment to complete a project that has been on the county’s major thoroughfare plan for decades,” County Judge Craig Doyal said in a statement. “That long-term planning encourages proper coordination with owners of large tracts of land and helps facilitate right of way donations that help reduce the cost of these projects. If we had not planned this roadway for decades, development would have occurred in these roadway corridors, ultimately driving up the cost of the project when roadways are built.”

Construction on the route north of Spring Creek is expected to begin later this fall, according to a statement. Williams Brothers Construction was awarded the contract for the TxDOT portion of the project earlier this year and is expected to break ground in the next 45 days.

Montgomery County Precinct 2 Commissioner Charlie Riley has previously said the four-phase project, which will stretch through Montgomery and Grimes counties, is slated for completion in 2020.

Upon completion, Hwy. 249 is expected to improve mobility and increase economic development in Magnolia and the surrounding area of Montgomery County, Doyal said.

“The [Hwy.] 249 extension will ease traffic congestion in southwest Montgomery County, and by opening up access, [the project] will generate high-value commercial development that will expand our tax base and help provide relief to residential property taxpayers,” Doyal said.
SHARE THIS STORY