Kelly and Matt Brantley will open Thirsty Bee Meadery in early January at 108 Commerce St., Tomball, Kelly said. The Brantleys, who also own BZ Honey in Tomball, will offer two different kinds of mead, also called "honey wine," Matthew said: traditional mead, with an alcohol content of about 11-12%, will be bottled like wine; and draft meads with lower alcohol content will also be served. Mead is made from fermenting local BZ Honey and water and is touted as the oldest alcoholic beverage, Matthew said. He said some meads will also feature various fruits or spices.

The couple said they believe Thirsty Bee Meadery will be the 13th meadery in Texas. In addition to tastings and mead-to-go, Thirsty Bee will also have a small selection of BZ Honey and items made from local beeswax available for sale.
RELATED STORIES

Matthew said he has been homebrewing since the 1990s.

"We just wanted to grow our honey business and continue the work we've been doing in Tomball, and this is a fun way to take our business to the next level and give people an exciting new product that, you know, you can't easily come by," Kelly said. "It's super popular at the [Texas] Renaissance Festival, but why not be able to have it all year 'round?" 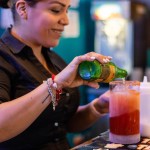