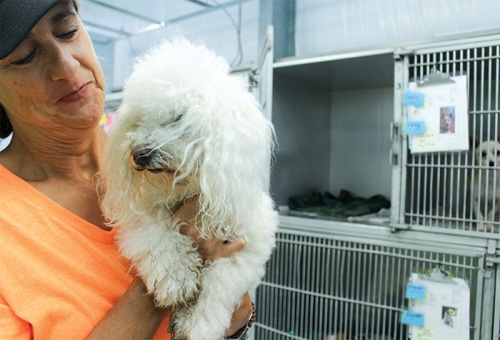 AAR, which houses both dogs and cats, relocated from Hufsmith Road in Tomball to a converted house on Wright Road earlier this year, allowing the nonprofit more capacity to shelter animals. Executive Director Debbie Allison holds a dog in the new dog barn.

Nonprofit organization Abandoned Animal Rescue began moving this spring from 419 E. Hufsmith Road in Tomball to its new space in Magnolia, a renovated house on Wright Road. AAR celebrated the grand opening of its new animal shelter facility May 19 after breaking ground on the property in June 2017.

The house—the purchase of which was funded through donations—was renovated to give the volunteer-run shelter more room to expand the number of animals it can care for, Executive Director Debbie Allison said. Although the exact number of animals the new shelter can hold is unknown, AAR plans to remain at its capacity until it is able to build up its base of regular volunteers.