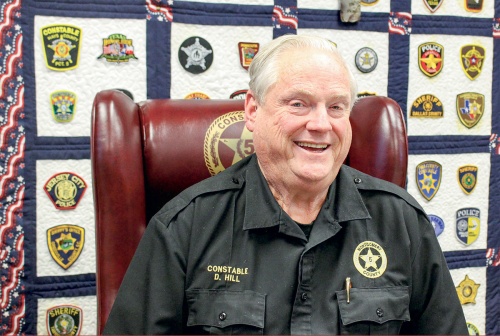 David Hill celebrated 50 years in law enforcement in August, nearly 35 years of which he has served as constable for Montgomery County Precinct 5.

“When I went into this job, I had two agendas: I wanted to be the best constable’s office in the state of Texas, and the second is I [wanted to] operate this office under Christian principles,” Hill said. “As good as I can, I’ve done that.”

Before becoming Precinct 5’s first elected constable, Hill served as a highway patrol officer in Magnolia with the Texas Department of Public Safety from 1969 to 1982. At the time, Montgomery County’s population totaled about 40,000 residents, Hill said.

As constable, Hill said he encouraged his team to focus on civil matters. However, constables in Montgomery County have begun patrol duties as well over the last few years, he said. Hill’s office expanded its operations Oct. 1 from five to seven days each week.

“We’re now making all types of arrests,” he said.

What drew you to law enforcement?
I got interested in it when I was in the sixth grade in 1960 in Palestine, Texas. We had a career day at our elementary school, and the Border Patrol came to talk to us. The Border Patrol in 1960 was making $400 a month. I said, “If I could have a guaranteed salary of $400 a month, I’d be rich.”

Seven years later when I went to work—1967—I was too young to go into highway patrol. My partner and I had driven up to Dallas, and [I] passed the Dallas police exam, but my buddy failed the test by one or two questions. I said, “I’m not joining without you.” So we drove back from Dallas to Huntsville and went to work at the [Texas Department of Corrections] as correctional officers.

What brought you to Magnolia?
In August or September 1968, I applied with [the Department of Public Safety]. My brother got out of the military, and he and I both applied to DPS right down here in Houston. We were both accepted.

When we completed school in January 1969, [DPS] sent me here [to Magnolia] to be the second highway patrolman that had ever been stationed in Magnolia. Our office was in the old community building by the library.

I turned 21 in December and came here in January. You had to be 21 when you graduated [from DPS], and you had to be 21 to buy bullets. When I was in school, I couldn’t buy bullets for my own gun. I was the second one here [in Magnolia] and just fell in love with it.

Why did you become constable?
[The county] decided in 1971 to cut back [from eight precincts] to four precincts. In 1980, they decided they would make another precinct out here, so I thought I wanted to be justice of the peace. The Commissioners Court was going to appoint a constable and justice of the peace to fill the office for the year 1982.

DPS at the time had a policy that if you decided you wanted to run for public office, the day you signed your name as a candidate, you were fired. I submitted a letter of resignation the day before [I filed my candidacy for constable].

I [went] 11 months without a job, without income [and] without insurance, and I had three kids. There was a lot of praying that went on for us to make that decision. Once I was convinced that that’s where God wanted me, then I jumped into it. In the primary [election], I won by 21 votes. I took office in 1983 and have been elected ever since.

Why have you continued to serve in Precinct 5?
I’ve had this goal for the last 10 years: I want to make 50 years. So I’ve run a couple extra campaigns to ensure that, but this community is why I’m here. I came here as a highway patrol thinking I’d work a year—maybe two—and then I’d go back home to Palestine. We decided to make [Magnolia] home. This is where we’ve raised our kids and our grandkids. If you’ve got a need and you take it to the people of Magnolia, they will just load your boat up. That’s what makes this job the best job in the world.
SHARE THIS STORY