Where did that 10-story cross in Tomball come from? 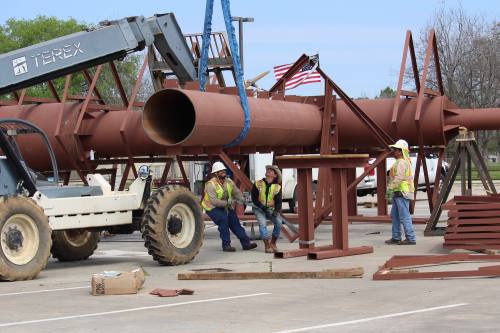 The Tomball Cross is assembled on the campus of River of Praise Church in Tomball.

A 125-foot steel cross was erected today in Tomball, towering above the Grand Parkway at Hwy. 249. Similar in height to a 10-story building and 82 feet across, founder Paula Whitaker said the Tomball Cross is both a religious monument and a memorial.

“My son wanted to help people. That’s what he told me two weeks before he passed away: he wanted to be a nurse,” Whitaker said.

Ryan—Whitaker’s only child—died in January 2007 at age 25 from medical complications. A few months after his death, Whitaker traveled to the Great Smoky Mountains in Tennessee with her husband, Ken. There, she spotted three identical large crosses over three days.

“That was not a coincidence,” Whitaker said. “God just placed in my heart, ‘You have to build this cross.’’’

As a result, Whitaker said she has spent nearly a decade planning to build the cross but did not find a good location for it until December, when she spoke with officials from the River of Praise Church, located at 13215 Boudreaux Estates Drive, Tomball. While the cross is housed on the campus of the church, the cross is independent from it, Whitaker said.

From this location, the cross can be seen from the top floor of the Tomball Regional Medical Center and by travelers on the Grand Parkway and Hwy. 249—major thoroughfares in Tomball. The cross is the second of its kind within a 250-mile radius, the first of which is located at Sagemont Church in south Houston, Whitaker said.

“Thousands of people a day will be able to be touched by this cross,” she said.

The cross—which cost an estimated $275,000-$300,000—was funded by The Ryan Paul Whitaker Memorial Foundation, established in 2007 with the mission of helping people in need, Whitaker said. James Potter, who has designed 50 similar crosses around the nation, designed the Tomball Cross.

Whitaker said several companies involved in the construction process have donated their services—from the soil test to the cross’ foundation.

“We just have had the most wonderful people who have wanted to be a part of it,” Whitaker said.

Bruce Hillegeist, president of the Greater Tomball Area Chamber of Commerce and a friend of Whitaker, said construction has been obstacle-free.

“It’s really been amazing how it’s been a smooth ride,” Hillegeist said. “We haven’t come across any resistance [from the Federal Aviation Administration or the county]. It’s just meant to be.”

The cross will be dedicated on April 9 at 6:30 p.m. on the campus of River of Praise Church, an event open to the public, Whitaker said.

“This is the cross of Tomball. It belongs to the people,” she said. “This is going to be such a blessing to so many people.”