The largest bond the school district has ever called, the 2021 bond package is more than double the $275 million bond voters approved in November 2017, according to district information. (Chandler France/Community Impact Newspaper)

The Tomball ISD board of trustees has placed a $567.5 million bond referendum on the Nov. 2 ballot, which includes four new schools, three multipurpose buildings and renovations associated with acquiring a former corporate campus.

“As [the] board of trustees, we had many thoughtful and deliberate discussions this year in response to what the community feels is needed to continue excellence in Tomball,” board President Matt Schiel said in an Aug. 12 release.

The largest bond the school district has ever called, the 2021 bond package is more than double the $275 million bond voters approved in November 2017, according to district information. The last of the 2017 bond projects—Grand Lakes Junior High and the TISD Stadium—opened in August.

This year’s bond, which the board called Aug. 12, seeks to address enrollment growth expected by the 2024-25 school year, Chief Operating Officer Steven Gutierrez said. District information shows a 32.2% increase in enrollment from 2015-16 to 2020-21 with more than 5,800 additional students anticipated in less than 10 years.

“We understood the growth projections based on what was known in terms of what real estate developments would be coming, but we know of several that have popped up since [the first meeting],” said David Apolskis, a TISD parent and member of the TISD Facility Study Steering Committee, which met in April and May to recommend a bond package to the board. “It creates a big [cost] that people might be afraid of, but it’s the number that’s needed to keep this district on top.”

Despite a change in state law requiring ballot language indicating a tax increase, the November bond package will not increase the total property tax rate for taxpayers, Apolskis said.

“The necessity of [the bond] is really the fact that you’re growing too fast, and you want to keep that same class size. ... You don’t want a whole bunch of portables out on the campuses. ... Realtors and future homebuyers don’t want that either,” he said. “I think that [committee] probably well represented the community that wants the best for the kids, and the best comes with having to put a bond out.”

Gutierrez said he believes elementary schools are needed to accommodate incoming students within the Rosehill and Grand Oaks elementary attendance zones as well as the Creekview, Timber Creek and Creekside Forest elementary school zones. Additionally, an intermediate school is needed to serve growth in the Oakcrest and Tomball intermediate school zones, while a third high school would relieve both Tomball and Tomball Memorial high schools.

“A lot of districts may be facing a decline in enrollment, but through our high-quality instruction, great extracurriculars, great facilities, people are really moving to Tomball,” Gutierrez said.

Creekview, Rosehill and Tomball elementary schools and Tomball Memorial High School are projected to exceed 100% capacity by the 2024-25 school year based on existing attendance zones, according to projections from demographics firm Templeton Demographics. In less than 10 years, Lakewood and Timber Creek elementary, Tomball Intermediate and Tomball High schools are projected to exceed 100% capacity as well, according to the report. 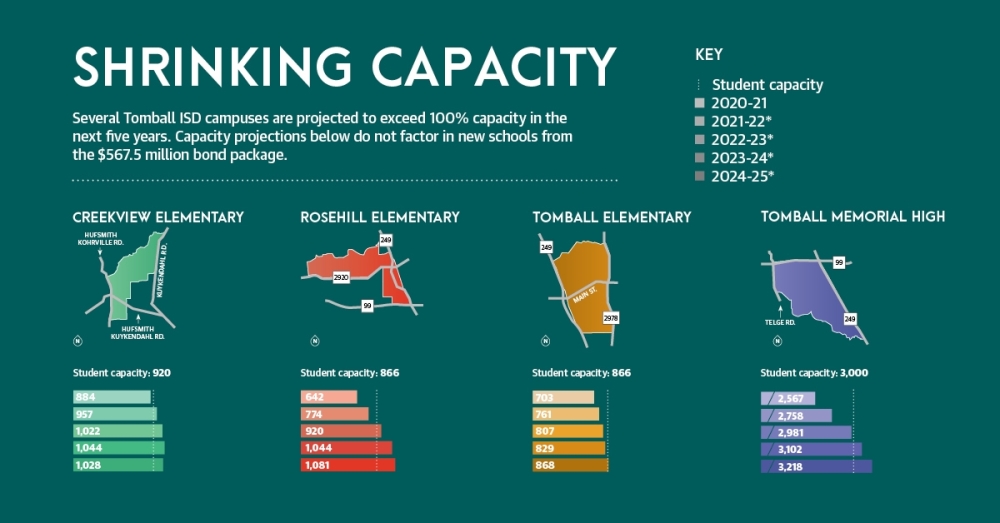 The growth stems from the number of new neighborhoods under construction. According to the district’s latest demographic report this spring, more than 1,550 home closings and 1,600 starts—the number of homes starting construction—occurred in 2020. This is a 34.49% and 44.72% increase from 2013, respectively.

As of the fourth quarter of 2020, more than 2,800 future lots were identified for residential development in TISD, according to the demographics report, in neighborhoods such as Amira, Rosehill Reserve, Rose Meadow Farms, Raburn Reserve, Wood Leaf Reserve, Rosehill Meadow, Lakes at Creekside, Woodtrace and Cherry Pines.


Bond on the ballot

For the first time, the district’s bond package will be split into five propositions following Senate Bill 30’s passage during the 86th Texas Legislature. Dax Gonzalez, division director for the Texas Association of School Boards, said the bill, which took effect Sept. 1, 2019, was passed to give voters more of an idea of what they are approving.

“We have always contended that you can’t get much more transparent than a bond package at a school district. There are months of community meetings; there’s a community bond committee that forms,” Gonzalez said.

According to the bill, SB 30 requires school districts to separate special projects, such as a natatorium or athletics facilities, from educational improvements.

Therefore, TISD’s Proposition A, the largest of the five, totaling $466.64 million, would fund a high school, an intermediate school and an elementary school to be located at Juergen and Mueschke roads, according to district information. The district purchased 205 acres on Juergen Road in 2012, Chief Financial Officer Jim Ross said in an email.

“We did debate whether it was time now to focus on High School No. 3, which is the biggest ticket item in that first part of the bond. ... It’s going to take up to four years to get that high school up and going,” Apolskis said. “The idea is, ‘Yeah, we’ve got to start planning now.’”

Additionally, Apolskis said the bond focuses on the equity of campuses, ensuring older facilities receive upgrades to better compare with newly opened ones.

Funds are also allotted for a second elementary school and renovations to the Eastside Complex, the former headquarters of oil service company BJ Services, which the district purchased in August. This includes relocating Tomball Star Academy—an early college high school—to the complex from Tomball High School.

Proposition B totals $27.8 million for technology, including student and staff devices, according to district information. Further, Proposition C includes $8.1 million for athletics, which Ross previously said could include additional seating at sports fields.

Apolskis, who was also a member of the steering committee for the 2013 bond, said community members advocated for multipurpose facilities initially in 2013 and revisited the need this spring.

In addition to calling a bond election in August, the board purchased the 70.45-acre former BJ Services campus at FM 2920 and Hufsmith-Kohrville Road for $39.5 million plus closing costs, paid from the district’s general fund reserves.

“The purchase of the former headquarters of BJ Services is a game-changer for Tomball ISD,” Superintendent Martha Salazar-Zamora said in an Aug. 17 release.

As BJ Services was a major property tax revenue contributor for both the school district and the city of Tomball, City Manager David Esquivel said the city will likely see a dip in short-term revenue since the district is a tax-exempt entity. However, Esquivel said TISD yields financial benefits to the city indirectly.

“[TISD’s] outside-of-the-box thinking and being innovative and proactive is absolutely a great thing for all of us in the community, so I think the indirect attraction for businesses and residential because of the school district is huge,” Esquivel said.

The district plans to add career and technical education space at the complex.

“In the bond we are calling for the renovation of the Eastside Complex to really house some centralized in-demand [CTE] programs,” Gutierrez said. “Think about welding or some of the heavy machinery [programs], the things that would be really cost prohibitive to do at three campuses. Our Eastside Complex is going to afford us the opportunity to provide hands-on, valuable industry experience at one location. Some of it is already equipped and outfitted with that equipment.”

The undeveloped portion of the complex will house the bond’s second elementary school as well.

“What this complex will provide Tomball ISD, the community, local businesses and students will be like no other, and the acquisition removes countless barriers to innovation and progress within Tomball ISD for the foreseeable future,” Chief Academic Officer Amy Schindewolf said in the Aug. 17 release. 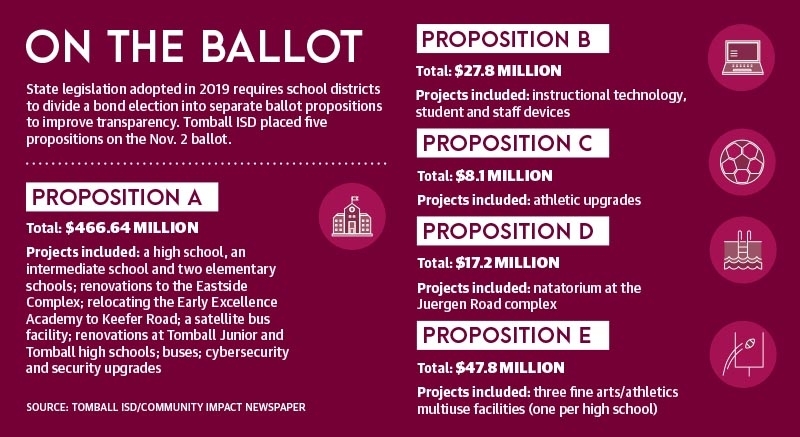 Chandler France contributed to this report.