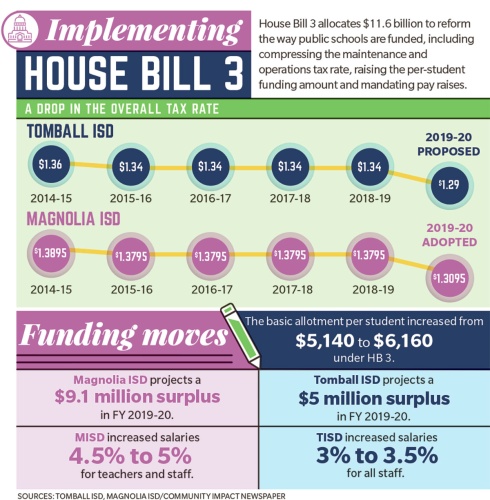 Editor's note: This story has been updated to include the most recent teacher salary increases for Magnolia ISD.

The TISD board of trustees approved the district’s $141.8 million general fund budget June 12 but had not adopted a tax rate as of publication Sept. 3. However, Chief Financial Officer Jim Ross said he plans to propose a $0.05 decrease in the tax rate, which would total $1.29 per $100 valuation.

“The long-term goal is to wean schools off property taxes and replace property taxes with sales tax,” said Chandra Villanueva, the Economic Opportunities Program director for the Center for Public Priorities, an independent public policy association.

TISD anticipates a $5 million surplus in FY 2019-20 as the adopted budget did not factor in HB 3 changes, Ross said. He said the district plans to reserve surplus funds for opening a new elementary school in August.

MISD officials project a $9.1 million surplus in FY 2019-20, MISD Assistant Superintendent of Operations Erich Morris said during a July 22 budget workshop. The FY 2019-20 budget allocates $5.65 million of the surplus—including all of the additional funds received from HB 3—for employee compensation. HB 3 mandates 30% of the increased per-pupil revenue be used for salary increases.

“Every time there’s an adjustment like this, there are winners and losers,” Morris said July 22. “I do feel like we’re in a very good position, though. We have a very competitive [compensation increase] package.”

The TISD board approved pay raises of 3% to 3.5% for all staff—instead of the 2% approved initially June 12—at a special July 24 meeting. Staff will see a 3% increase, and teachers, librarians and nurses with six or more years of experience will see a 3.5% increase, Ross said at the meeting.

“When we voted on this [budget] in June, I believe the sentiment across the entire board was based on what happened with House Bill 3; this was as good as it could get based on our analysis at the time,” TISD trustee John McStravick said during the meeting. “I’m glad that we are able to reassess that and come back and make some changes.”

Despite the new additional funding, district officials said they are cautious about future gains from HB 3.

Ross said in an interview he believes TISD will be able to sustain future expenses as long as the state continues funding HB 3.

“I have not seen a [legislative] session where they increased funding so dramatically with no new funding source. … They’re entirely dependent upon the economy remaining strong in the state of Texas,” Ross said. “I’ve modeled [HB 3] out to about four years out, and it looks fine. As long as [the state] can continue to fund House Bill 3, we’ll be fine.”