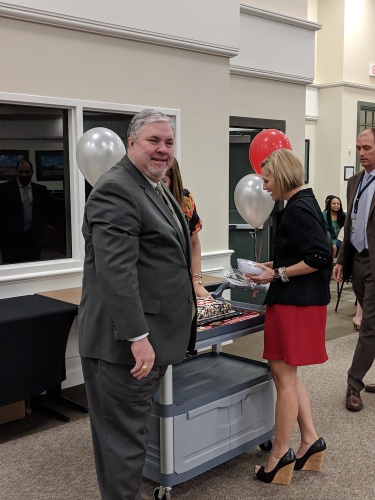 "Chris exemplifies Team Tomball," Salazar-Zamora said during the April 8 board of trustees workshop. "You have left a mark in this district. You will always be a part of team Tomball. We are so proud of what you are going to go and do and accomplish in your district. Never forget that this is still home."

Trotter has worked at TISD for nine years under the direction of three different superintendents, Salazar-Zamora said.

"Nine years ago and two weeks to this day, we moved to Tomball and started a career here. I consider everybody in this room family—part of my extended family," Trotter said during the workshop. "I look forward to the new endeavor."

Cleveland ISD is located east of Conroe. The district enrolled 4,716 students in the 2016-17 school year, according to the Texas Education Agency.

Like Tomball ISD, Cleveland ISD is considered a fast-growth district by the Fast Growth School Coalition, as both districts have seen enrollment growth of more than 10 percent over the last five years.

"Chris, you've been great for the district," board President Mark Lewandowski said during the workshop. "One of your dreams has always been to be a superintendent. I'm glad you're able to fulfill that dream. We will miss you, and thank you for all you've done for Tomball ISD."