The grant program offers two-year grants from TCLFF supporting learning in the fields of science, technology, engineering and math, according to the Sept. 12 news release. The two-year educational grants total more than $600,000 and are awarded to 19 elementary, middle and high schools in Southern California and East Texas beginning in the 2018-19 school year. Inspired by "Young Sheldon," the grant caters to schools in Southern California where the show is produced and in East Texas where the show is set, according to the news release.

According to the news release, grant funds can be used for robotics kits, computers, iPads, lab tables, 3D printers, curriculum development, teacher training and other resources. Grant funds also cover the cost for an annual educational trip for students and teachers at each school. Schools are eligible to apply for continuing grants at the end of the two-year period.

Students and teachers at Texas schools receiving grant funds will attend customized educational trips to Space Center Houston, according to the news release.


“To those of us involved in making it, 'Young Sheldon' is more than a television series. At its heart, it’s a story about potential," Executive Producer Chuck Lorre said in a news release. "When the education of a child is supported, there is no limit to what that child might eventually achieve. We hope that in some small way, this program gives these public schools more STEM educational tools in the classroom for teachers to nurture and ignite the curiosity of students who will ultimately become our future leaders and scholars.”

View a video from the cast of "Young Sheldon" congratulating the schools.

As a district, TISD also received an overall "A" rating from the Texas Education Agency's 2017-18 accountability ratings released Aug. 15. The district is just one of 153 districts in the state to receive the highest rating overall, Community Impact Newspaper previously reported.

See how each campus fared in accountability ratings and results from the 2017-18 State of Texas Assessments of Academic Readiness as well.
SHARE THIS STORY

Applications for a place on the May 2 election ballot in Tomball and Magnolia may be filed starting Jan. 15. 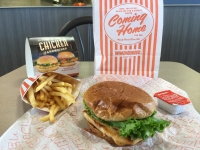 The eatery would be located off of Melton Street near Brookshire Brothers in the city of Magnolia.