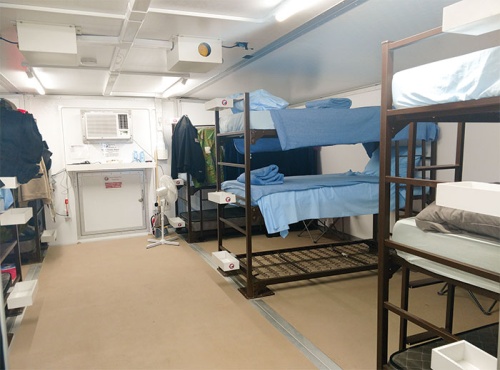 Mike Costello, president and founder of Missions on Wheels, said he launched the nonprofit organization in 2010 to provide mobile shower trailers for homeless individuals. However, the organization’s mission quickly shifted to aiding in disaster recovery as tornadoes, floods and hurricanes wreaked havoc across the state, Costello said.

As the trailers are offered at little or no cost, volunteers are needed to help Missions on Wheels with operation and deployment of the trailers.

Missions on Wheels sets up its trailers in communities, trains local personnel to operate the equipment and then returns to pick up the mobile units once they are no longer needed, Costello said.

“For long-term recovery you have to have food, beds and showers,” he said. “Food is pretty easily available. … Beds and showers are a little bit harder to come by, and that’s the need we fill.”

The nonprofit provided its first mobile shower unit to Van, Texas, after a tornado in 2015, Costello said. After the spring 2016 floods, Missions on Wheels deployed units to Conroe and Angleton as well as Baton Rouge, Louisiana. Once Hurricane Harvey hit the Gulf Coast in August 2017, Missions on Wheels again deployed shower and newly completed dorm trailers across the state from Kirbyville to Rockport.

“We deployed [the dorm trailer] two days later,” Costello said. “We really haven’t stopped our response to Harvey since then.”

Costello said all of the organization’s trailers are in use across the U.S. Additional trailers may be purchased as funding allows.

“To see homeowners get moved back in, that’s the end game; that’s the goal,” Costello said. “If you think of teeth on a gear, we’re just one little cog, but without it, things stumble. … Everybody has a small part to play in it.”