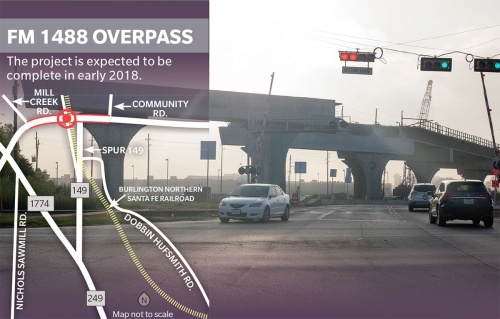 The project is expected to be complete in early 2018.

The long-awaited overpass at FM 1488 and FM 149 in the city of Magnolia is approaching completion in the first quarter of 2018, according to the Texas Department of Transportation. City officials said the overpass will bring an ease of mobility as well as economic growth and development to Magnolia.

When completed, the overpass will provide drivers a direct route over the Burlington Northern Santa Fe railroad at the intersection of FM 149 and FM 1488. The $28.5 million project funded by TxDOT also widens FM 1488 between Mill Creek and Community roads to four lanes, according to TxDOT. Construction began on the project in December 2015.

Magnolia City Administrator Paul Mendes said some lanes of the overpass were expected to open to traffic in August. However, there was no team available to block traffic on the railroad tracks during construction, which delayed the project.

Upon completion, Mendes said the overpass at FM 1488 and FM 149 will bring great relief to Magnolia.

“[The area] has been a bottleneck for years—even before we got the amount of traffic we have now,” Mendes said. “You get a train that comes along that’s 100 cars long, and traffic is backed up all the way almost to Windcrest National Golf Course.”

“The overpass will definitely allow the traffic to flow smoother in the morning, during afternoon dismissal and especially during big events like football games,” Meyers said. “As we continue to grow, we all know how important it is to have the infrastructure to support the growth.”

Tana Ross, economic development coordinator and planning technician for the city of Magnolia, said the overpass will also bring significant economic growth to the Magnolia area.

“That overpass will definitely be the catalyst for [Magnolia Commons],” Ross said. “Therefore, [the city] will benefit from that new retail center that includes H-E-B as other cities have done before us.”

Ross said the overpass completion is also expected to affect tax revenue growth for the city.

“It will contribute in a large way to help sales tax revenue grow, and as you have more amenities, that will also increase your property [value],” Ross said. “Those values will increase simply due to the fact that [the amenities] are more accessible.”

Ross said a portion of the FM 1488 and FM 149 overpass will open to traffic in October.
SHARE THIS STORY