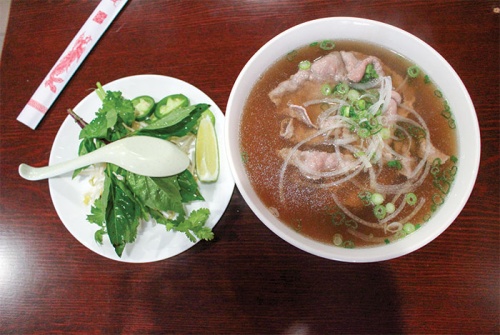 Yummy Pho House owner Thao Huynh has worked in the restaurant industry for 18 years. Huynh said she stayed home for a few years to take care of her two children, but once they got a little older she wanted to go back to work.

“Now that they’re [ages] two and four, I thought, ‘OK, I can do something for myself,’ so we opened up [Yummy Pho House],” Huynh said.

She and her husband, who is the restaurant’s chef, opened the restaurant in June 2018 near the intersection of FM 1488 and FM 2978 in Magnolia.

Huynh said she has owned and operated restaurants serving Vietnamese and Thai cuisine in both Seattle and Austin before coming to Magnolia.

“I looked around the area and saw that they didn’t have Vietnamese or Thai food nearby. We thought it would be a good opportunity for us,” Huynh said.

Huynh said pho is the restaurant’s best-seller and is available with various protein options including rib-eye steak, brisket, chicken breast, shrimp and tofu.

Huynh said everything is made to order with one exception: the beef broth. Beef bones are cooked for at least 16 hours to get the proper broth flavor, she said.

“Pho is a popular dish [right] now, and I thought it would be a good idea to give people in Magnolia good Asian food because it’s mostly Mexican and American food concepts [that are offered] up here,” Huynh said. “We provide something different.”

Since opening the restaurant several months ago, Huynh said she has had good support from the Magnolia community.

“Business took off faster than I thought. People were excited about having something new here,” Huynh said. “Come try something new. We make authentic food with a taste that’s always consistent.”