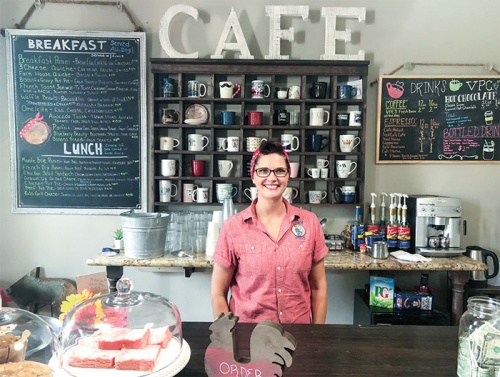 Sheila Blue, owner of Victory Pie Co. & Cafe, said her brother inspired her to open a pie cafe. Six years after her brother died while serving in the military in Afghanistan, Blue started selling her homemade pies at the Farmer’s Market on Tamina in 2017 and opened the cafe in Magnolia in February.

“[My brother] used to call me from the commissary, and my chicken pot pie was his favorite dish. He always called for the recipe, and it’s something that I’ve made for years,” Blue said. “I thought, ‘Well, why don’t I start selling them?’”

She said the cafe’s name comes from the victory gardens that sprang up in World War II, where Americans gathered together and grew food for those overseas at war. Blue said this is why she donates a portion of profits to the Explosive Ordnance Disposal Warrior Foundation, Snowball Express and Camp Hope.

Blue said she tries to make her guests feel at home.

“My end game is to be here for a really long time and become a recognized part of this community,” Blue said. “I want to be a fixture of Magnolia and just meld into what this place is. I want to be the place that everyone comes to and it feels like home—it feels like mom cooked for them.”