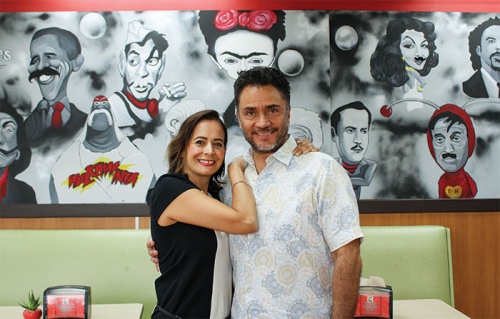 Editor's note: Bigote's Street Tacos announced on its Facebook page Aug. 12 that the restaurant's Tomball location is closed for improvements and will reopen upon further notice.

When they purchased Bigotes Street Tacos in December 2017, owners Eduardo and Berenice Camarena knew the restaurant had the potential to grow and wanted to help get it there, Eduardo Camarena said.

“I saw potential when I first came here,” he said. “I think there’s a lot of growing we can do, and I have plans to make it happen.”

The Kuykendahl Road restaurant opened three years ago, and since then, its laid-back vibe, quirky use of mustaches and its menu have continued to attract customers across the area, Camarena said. Bigotes—the Spanish word for mustaches—are the namesake of the eatery and are displayed throughout the restaurant, whether along mustache duct tape or in the mural of celebrities with thick black mustaches.

The eatery specializes in authentic Mexican food and uses only fresh ingredients, meaning everything is made to order, Camarena said.

“This is not Tex-Mex; this is totally real Mexican food,” he said. “A lot of places say they serve Mexican, but they don’t do it right.”

The menu includes a variety of breakfast, lunch and dinner options, such as quesadillas, sopes and tortas. The street tacos are the most popular dish and can be served with a number of different meats and toppings depending on customer preference, Camarena said.

“We take a lot of pride in [the] quality of our food,” he said. “The [cooks] make everything here inside the kitchen with fresh veggies and meats. We cook everything here; nothing goes in a microwave.”

Additionally, a new location of Bigotes opened in mid-July in Cleveland, Texas, according to a spokesperson for the business. This is just the start of a regional expansion, Camarena said.

“Our customers drive from all over to come here, so I would like to put restaurants around the area so it can be closer to them,” he said. “I need to take it one-by-one, though, to keep the same quality we have in this restaurant.”