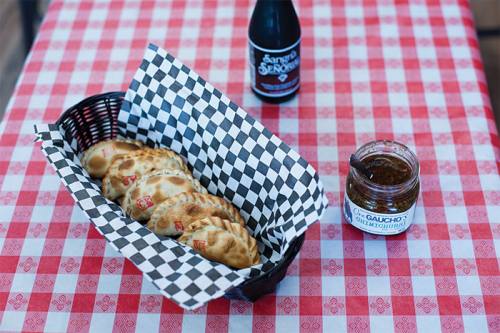 Empanadas are $2.29 each. Gluten-free options are available for an additional 75 cents each.

Che Gaucho, which offers hard-to-find Argentine cuisine in Tomball, gets its name from Argentine cowboys who were partly responsible for the independence of Argentina in 1810, owner and manager Diego Copa said.

“You see a lot of Mexican food everywhere you go,” Copa said. “But I wanted to introduce Argentina to Houston [and] to the U.S. and [have people] see what that’s like and what the people of Argentina are like.”

The Argentine empanada house serves Argentine dishes, such as grilled meats, pizza, sandwiches and sweets, for lunch and dinner.

Copa said his parents catered empanadas to the Residence Inn Marriott in Tomball, and he wanted to gift his parents a restaurant to give back to them. When Copa had saved up enough money, he began looking for a storefront for the empanada business and found the space on Main Street, where the eatery opened in April.

“My parents moved [the family] from Argentina when I was 11,” he said. “That was pretty traumatic. They had to give up everything just so my brother and I could have a better life.”

Copa handles the operations and management of Che Gaucho. His mother, Noemi Copa, makes empanadas; his aunt, Alicia Copa, bakes; and his dad, Hector, grills. Copa said his family wants to open a second location in Austin in 2019.

“We’ve seen that the [Austin] market is the best market for what we have,” Copa said. “The food, the environment [and] the demographics that have come here and the age groups are very fitting for what Austin has to offer.”

Copa said customers come from all over the Greater Houston area to visit the Argentine eatery.

“On a Saturday, you’ll see this place filled with [Argentines] that come from all over town,” he said. “We have a lady and her daughter that come from New Caney, [and] we have families that come from Katy, Sugar Land and Pearland.”