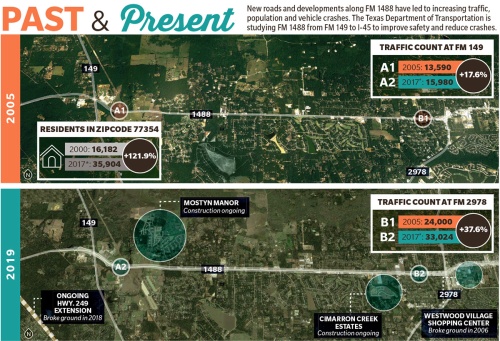 New roads and developments along FM 1488 have led to increasing traffic, population and vehicle crashes. The Texas Department of Transportation is studying FM 1488 from FM 149 to I-45 to improve safety and reduce crashes.

The 14-mile stretch of FM 1488 between FM 149 and I-45 saw one crash per day on average from 2015-17, according to information presented at a May 23 Texas Department of Transportation public meeting.

Along the corridor, there were a total of seven fatal motor vehicle crashes during that time with one fatal crash occurring already this year, according to TxDOT crash data.

Jay Tombaugh, a resident of Mostyn Manor east of Spur 149 on FM 1488, said he has seen the amount of traffic, speed of drivers and pace of development change considerably in the six years he and his wife, Elaine, have lived in Magnolia. As there is no signalized intersection for Mostyn Manor residents from FM 1488, Jay Tombaugh said he is concerned about the future of FM 1488.

“I don’t think you can stop the development now. You can’t stop people from moving here,” he said. “We enjoy living here, and there are many things about it we would miss if we moved, but our fear is that what we’ve seen happen in the six years that we’ve been here is just a taste of what’s going to happen in the next five [or] six years. Unless they do something [about FM 1488], it will be just unbearable.”

The large number of crashes paired with upcoming development along the corridor prompted TxDOT to begin an access management study this January, Public Information Officer Emily Black said in an email. The ongoing study aims to identify improvements for reducing crashes, improving mobility, enhancing multimodal connectivity, and supporting existing and future development throughout the corridor, according to TxDOT information.

“The purpose of this access management study is to identify low-cost, high-impact treatments that reduce crashes and improve mobility with fewer conflict points, or areas where vehicles may cross paths, in the corridor,” Black said. “The ultimate goal is to increase safety and reduce crash numbers.”

As of May 23, 21% of land along the FM 1488 corridor was still vacant or developable, according to TxDOT information, with regional transportation projects and master-planned communities, such as the 3,300-acre Audubon Magnolia development, slated close to the corridor within the next few years.

The amount of traffic and rapid pace of development leads Jay Tombaugh and other residents of the Magnolia community to believe the FM 1488 corridor will only continue to be a concern.

“I think that’s a very valid concern is that within the next few years we will be the [FM] 1960 of the north, if you will—just concrete and traffic that poses significant problems,” Tombaugh said.

Paired with more vehicles, the population for ZIP code 77354—which encompasses the FM 1488 study area—totaled 35,904 residents in 2017, more than double the population in 2000, according to U.S. Census Bureau estimates.

These rising numbers—as well as upcoming developments and ongoing thoroughfare projects—have led to the launch of TxDOT’s study, officials said.

For example, Audubon Magnolia is slated to begin construction just west of the study’s boundaries on FM 1488 by year’s end, featuring more than 5,000 homes at build-out, Community Impact Newspaper previously reported. Additionally, TxDOT’s ongoing extension of Hwy. 249 from FM 1774 in Pinehurst to FM 1774 in Todd Mission is slated to finish in spring 2021.

“The area is growing. This growth means that we need to monitor how the corridor is functioning to help ensure the best possible travel experience for roadway users,” Black said.

The $700,000 access management study began in January and is expected to take just under a year, she said.

As part of the study process, TxDOT held a public meeting May 23 at Mitchell Intermediate School in The Woodlands to hear input on residents’ top priorities for improved access management on FM 1488, Black said. A second public meeting will be held this fall for TxDOT to gather community input on its proposed recommendations for FM 1488.

Once the study is completed, recommendations will be broken into short-, medium- and long-term improvements to the corridor, with short-term improvements slated to begin in one to five years once funding for the projects is identified, Black said.

Possible projects could include dedicated left and right turn lanes, traffic signal improvements, and bicycle and pedestrian accommodations, Black said. Widening FM 1488 from four lanes to six lanes between FM 2978 and I-45 is also proposed. The project is currently unfunded but could be sent in fiscal year 2024 for construction bids, she said.

In the short term, TxDOT plans to construct a raised median in FY 2022 with $6.9 million in Highway Safety Improvement Program funds recently allotted for the FM 1488 corridor, Black said. The median would extend from Mostyn Drive in Magnolia to I-45.

“Safety funds are allocated based on a statewide competition,” she said. “While obtaining the funds is a good thing, it also means that FM 1488 has a higher than average number of safety issues we can address.”

With an FM 1488 TxDOT overpass and widening completed last summer at FM 149, speeding on FM 1488 has become a major concern as the project alleviated much of the traffic congestion in Magnolia, Montgomery County Precinct 5 Constable Chris Jones said.

Speeding contributed to about 20% of crashes recorded from 2015-17 in the study area, TxDOT information shows.

Jones said Precinct 5 as well as the Montgomery County Sheriff’s Office and the Texas Department of Public Safety patrol the FM 1488 corridor regularly to cut down on speeding.

“The rapid increase in traffic along [FM] 1488 is something everyone needs to be aware of and adjust to,” said John Pozadzides, the president of the Lake Windcrest Property Owners’ Association—located on FM 1488 within the study area—in an email. “As a community we’ve had residents involved in accidents, which is a concern to all. Generally speaking, our residents feel the continual law enforcement presence on [FM] 1488 from state and local agencies helps save lives.”

Rob Eissler, former state representative and current executive director of the Westwood Magnolia Parkway Improvement District, said the WMPID plans to landscape part of TxDOT’s proposed median to help slow the pace of traffic. The WMPID is a sales tax-collecting entity that helps fund infrastructure projects in the FM 2978 and FM 1488 area.

“We’re trying to make it more like a special district if we can landscape the median. It would just kind of slow down the race track atmosphere of [FM] 1488 because it does look like a concrete jungle out there when things are really busy,” he said.

Eissler said the WMPID boundaries include approximately 800 businesses, which is a cause for the denser traffic. However, he said he believes further development east and west of the intersection may ease congestion as new amenities and neighborhoods draw drivers elsewhere on FM 1488.

“We don’t want to be a victim of our own success. It would be great if we could thin out the busiest places,” Eissler said. “But I think as things develop, that may work on its own as further west gets developed and even east.”

Jones said he believes FM 1488 sees so much traffic because it is the primary east-west thoroughfare for Magnolia-area residents traveling to I-45. He said he believes another east-west route will be necessary to accommodate the coming development.

“There is no alternative route this far up where we are to get anywhere near I-45 unless we go up through Montgomery and go back that way,” Elaine Tombaugh said.

“[FM] 1488 is going to soon become another [FM] 1960, and that is not a good thing,” Mostyn Manor resident Vern Wanzong said. “We are quickly losing the chance to maintain the Magnolia area as a loose urban area with lots of trees and space. Once all that is gone, it’s gone.”
SHARE THIS STORY