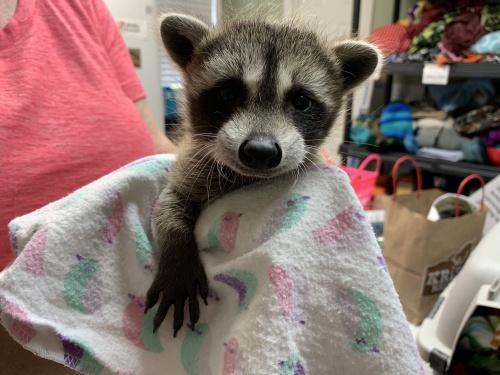 This baby raccoon and her brother were taken in by Friends of Texas Wildlife after the raccoons' home was demolished.

Thousands of acres of undeveloped land in the Tomball and Magnolia areas are being cleared to make way for infrastructure projects and large-scale developments opening in the next few years, such as the Hwy. 249 toll road extension and Audubon Magnolia community.

From 2012-17, the population of the two Tomball-area ZIP codes grew 19.7%, while the two Magnolia-area ZIP codes saw 13.3% growth during that time, according to U.S. census data.

Such population growth requires more infrastructure, such as homes, commercial properties and roads, which means redeveloping open fields and forested areas—all of which are home to various wildlife, Norrid said.

“When you have development coming in, you’re going to have a natural loss of habitat for the critters that call that area home as well as fragmentation of habitat,” he said. “You may have green areas within an urbanized area, but most species need a contiguous habitat.”

Wildlife has only three choices—move out, adapt or die—when it comes to the redevelopment of their homes, said John Warner, urban district forester for the Texas A&M Forest Service, which manages the W.G. Jones State Forest on FM 1488 near Magnolia. He said most animals choose to adapt, but residents do not always adapt in the same way.

“Magnolia is a gorgeous area. People move there to live in nature, but they need to be educated on the wildlife that they inevitably will come in contact with,” Warner said. “These are not domesticated animals that you should leave food out for or try to keep as pets. They are called wildlife for a reason.”

Tomball and Magnolia residents may see several species of wildlife, Norrid said, but the most common species in the area are white-tailed deer, raccoons, rabbits, snakes, feral hogs, coyotes, bobcats, opossums and various species of birds. White-tailed deer numbers across the state have dramatically increased in the past few decades, he said.

Through the loss of habitat because of increased development, animals learn to adapt to the new structures and homes, Norrid said. They often find new living quarters inside sheds and garages, under porches and within cracks of buildings as well as remaining wooded areas.

The number of total working lands in Montgomery County—which encompasses land used for agricultural purposes as well as wildlife management—decreased by 93,494 acres from 1997 to 2017, according to the latest available data from the Texas A&M Natural Resources Institute.

Despite adaptation, development of the Tomball and Magnolia areas forces wildlife into increasingly smaller areas, Norrid said, such as neighborhoods and parks.

“The squeezing of [wildlife] into smaller and smaller habitats until they get basically forced onto one little piece of land that has yet to be developed leads to more overpopulation, more vehicle strikes, more animal aggression,” he said. “This combination creates major issues for both humans and wildlife.”

Additionally, Norrid said the green spaces of urbanized areas, such as the outlying Houston-area communities, become fragmented through development, which makes areas uninhabitable for most wildlife, he said.

“Most species need continuous acreage in order to live there, so building these half-acre parks doesn’t allow for adequate wildlife habitats,” Norrid said.

While development in both Tomball and Magnolia affects wildlife habitats, most of the new construction—and therefore, wildlife problems—is occurring in the Magnolia area, Norrid said.

The city of Magnolia has several residential projects slated for construction over the next few years, including Audubon Magnolia, a 3,300-acre, master-planned community developed by Sam Yager Inc. near FM 1488 and FM 149, which is set to bring 5,000 homes at build-out.

“There are city and county regulations that restrict what you can and can’t do, but [developers] have to think about that balance between following those regulations while still preserving and sometimes even enhancing the wildlife of developable land,” said Sam Yager, executive vice president of Sam Yager Inc.

To minimize effects to the environment along the project’s route, Evans said TxDOT has conducted nest surveys prior to tree clearings; planted native species of grasses, shrubs or trees on right of way land; reforested nearly 20 acres of wetlands; and restored more than 16,000 feet of Spring Creek for flood mitigation.

Large-scale projects such as these are perfect opportunities for developers to better plan for wildlife conservation, said Cheryl Conley, board president of Texas Wildlife Rehabilitation Coalition. The TWRC, a Houston-based nonprofit that rehabilitates wildlife across the U.S., sees about 4,000-5,000 wild animals each year, she said.

Conley said she plans to relocate TWRC from Houston to the Tomball-Cypress area because wildlife displacement is a significant problem in the area. However, no timeline has been released for a relocation.
“All of these problems—overpopulation, increase in roadkill, forced adaptation to growth—are because of development, but there are things developers can do to at least try to preserve the wildlife we still have,” Conley said.

Norrid said instead of developments abutting creeks, lakes and bayous—which are turned into ditches—he would like to see developers preserving these bodies of water to create corridors for wildlife to travel between the fragmented habitats.

“We work with organizations to preserve areas like these for flood mitigation but also for wildlife and recreational corridors,” he said. “We can coexist as long as we’re willing to put in some effort.”

While developers can take measures to preserve wildlife, residents can also do their part. For example, Conley said residents should replant one tree for every one torn down.

“These forested areas provide so many benefits for people and wildlife—habitats for the animals [and] recreation, clean water and clean air for the people—and it’s so important that these fragmented forests are somehow tied together throughout regions like Montgomery County or Magnolia,” Warner said.

“It’s done totally out of love and concern for the animal, but a lot of times people will, what they call ‘rescue’ an animal, when in fact that animal did not need to be rescued,” Conley said. “They need to leave the animals alone and call us before they decide to bring an animal in.”

“Leaving food out for these animals makes them get too comfortable with humans, and they lose that boundary between us,” he said. “It also teaches them to become dependent on us for food, and that can be dangerous for the animal.”

Coudert said the most important piece of wildlife conservation is educating the public.

“If we can do more education, then maybe we wouldn’t have to do so much rehabilitation,” she said.
SHARE THIS STORY