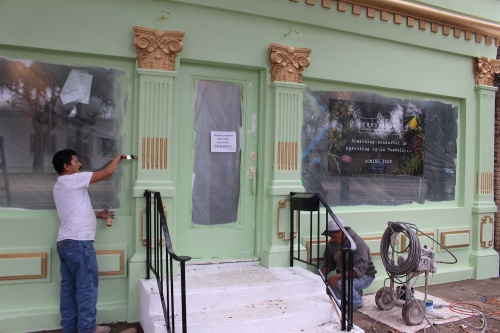 Renovations are wrapping up to 311 W. Main Street in Old Town Tomball.

Developers Dion Or and her husband Michael Pierce, owners of Ideaco Investments, are working to renovate two Main Street properties in Tomball, adding European-style architectural elements and bringing in new tenants to the city's Old Town area, Or said.

The development company has previously worked with industrial properties in Houston but chose to begin working in Tomball as she and Pierce are Tomball residents and history lovers, Or said.

This is the first [project] we're doing in Tomball and the first retail for us," Or said.

Renovations to 311 West Main Street—the former home of Tomball Rocks—have been underway for about five months, Or said, but a new tenant will open Feb. 1. Terrarium, a shop offering home decor, plants and gifts, will open in the renovated space and is anticipated to add a patio featuring a greenhouse garden, she said.

"It's not just having a space and renting it out. We're very picky about who we bring in," Or said.

Or said their goal is to create a space in which people are inspired to shop. At 311 West Main Street, the facade has been redone and will feature a gray front with gold accents and architectural details such as European-style columns and a soon-to-be-laid black and white mosaic on the front steps.

"We want to bring in Germany, European-style to Tomball," Or said. "You don't see it here."

Additionally, the original steps have been preserved from the 1940s, she said, as well as an original shiplap wall inside and other interior elements dating back to the 1940s.

"We want to keep the history," Or said. "We don't rebuild, we restore and then inspire people to shop."

Since the exterior renovations have begun, Or said people have stopped by to take pictures nearly every day.

"We want to make it ... an Old Town Tomball landmark," she said.

Or said she and Pierce plan to start renovations in the coming weeks to 313 West Main Street located next door—the former location of Ron's Good Junk. The building's Main Street front will feature similar architectural elements, she said, and the shop's interior is slated to feature a living room-like atmosphere with couches in place and coffee available.

The couple plans to continue restoring additional buildings on Main Street, Or said.

"We love Old Town Tomball," she said. "We're trying to bring it back to life."