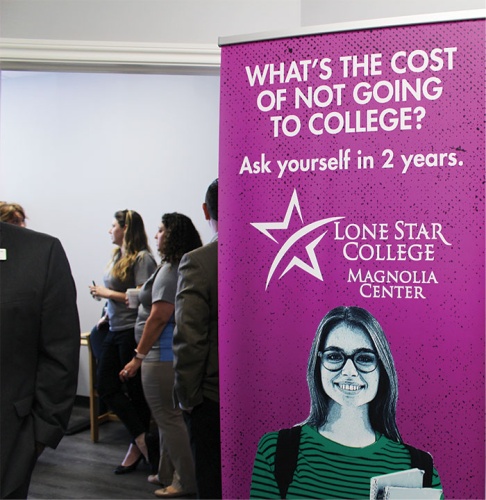 Lone Star College System and the Greater Magnolia Parkway Chamber of Commerce ncelebrated the opening of LSCS offices on July 25 to offer advising services in Magnolia.

The Greater Magnolia Parkway Chamber of Commerce hosted an open house July 25 to celebrate the grand opening of Lone Star College-Magnolia offices, the first step in bringing the LSC-Magnolia Center to the area.

The new office space, which is located at 18423 FM 1488, offers a range of advising services to students in the area, Lone Star College System officials said. The key services the Magnolia offices offer are orientation, admission, financial aid assistance and general advising services for students and parents of students at LSC-Montgomery.

The future LSC-Magnolia Center will be a satellite campus of LSC-Montgomery, LSCS officials said.

“Regardless of where somebody’s going to college, they might need help with the [Free Application for Federal Student Aid], so there will be an adviser here to help people fill out the FAFSA, even if they’re not coming to Lone Star [College],” LSC-Montgomery President Rebecca Riley said.

The facilities are open Tuesdays and Thursdays from 9 a.m.-5 p.m., although Riley said LSCS is willing to adjust hours to meet community needs.

“We’re thinking that when it gets time closer to when school starts, traffic will pick up,” Riley said. “Students will have more questions and need our help, so we might get busier with all that.”

The office space is the first major step that LSCS has taken to bringing more resources to the Magnolia area.

In 2014, voters approved a $485 million LSCS bond referendum, which included funding for the LSC-Magnolia Center. However, the location of the future 65,000-square-foot center is still unknown, Riley said. LSCS officials previously said ease of access for Magnolia residents is key in choosing a site.

Riley said LSCS officials have made offers on several properties. However, LSCS officials cannot pay more than the appraised value for the property, Riley said, which makes it difficult to find a site as property values increase.

“We’ve narrowed it down to a few sites again, so we’re hopeful that this time will be the charm and we’ll have a site selected soon,” Riley said.

The center would mark the first expansion into Magnolia, as Magnolia residents seeking to enroll in LSCS courses currently must travel to the existing LSC-Tomball, LSC-Creekside Center or LSC-Montgomery campuses located in Tomball or Conroe.

“We’re trying to make it as convenient as possible for people to get the services that they need to go to college,” Riley said. “Our whole goal is to make access to college more ubiquitous. So anyone who wants to go can figure out how to go.”