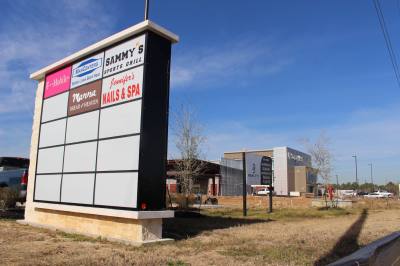 The second retail section of Northpointe Center is under construction by Realty 1 Partners at Hwy. 249 and Northpointe Boulevard.

Between the Grand Parkway segments F-1 and F-2—which opened to drivers in February 2016—and Spring Cypress Road, numerous restaurant, retail and office spaces have opened along Hwy. 249 in 2017. More facilities are slated to open in the area this year, including office parks, retail centers, Restaurant Depot—a wholesale food service supplier—and the Honda of Tomball dealership.

“There aren’t many areas in Houston like this Hwy. 249 corridor,” said Jonathan Hicks, senior vice president and market leader at SRS Real Estate Partners. “You have a lot of houses already built, you have high incomes, and you have houses continuing to be built.”

The number of commercial building permits issued for new structures along heavily traveled thoroughfares in the 77377 ZIP code, which encompasses part of the Hwy. 249 corridor, increased from four permits in 2014 to about 17 permits in 2017, according to data from the Harris County Engineering Department. About
35 additional permits were issued to commercial tenants in 2017 as well.

Bruce Hillegeist, president of the Greater Tomball Area Chamber of Commerce, said he believes business growth in the Northpointe area is linked to a growing number of homes, the school districts, high traffic counts and access to major thoroughfares.

According to the Texas Department of Transportation, the annual average daily traffic count on Hwy. 249
just south of Spring Cypress Road grew from 122,360 vehicles in 2015 to 127,610 vehicles in 2016.

Beau Evans, manager of Realty 1 Partners, said he believes the Northpointe area has previously lacked commercial development in proportion to the growing number of residents.

“I thought it was a market that was a bit underserved for retail,” Evans said. “There’s certainly a need in that area for good restaurants [and] good neighborhood services, which is what we’re trying to bring.”

“There’s a few retailers in the area, but there is a bunch of good midlevel-and-above type houses that are pretty well occupied by the actual owners—not a lot of renters,” Evans said.

In addition to higher incomes and traffic counts, Hicks said the area is attractive for commercial development because of the number of homes and the proximity to employment centers, such as the Hewlett Packard campus and Chasewood Technology Park at Hwy. 249 and Louetta Road.

“As long as the incomes stay high [and] the houses continue to be built, this area is going to be interesting for a lot of folks,” he said. “You’ve got a lot of the really fundamental dynamics that make commercial development work out here.”

The Shops at Spring Cypress will be located next to Dunkin Donuts on Spring Cypress Road and may feature tenants, such as a dry cleaning business, child care facility or auto service provider, that cater to morning traffic, Hicks said. However, no tenants or a timeline for the project have been confirmed.

“There’s nothing that’s forcing us to do something immediately, so we’re going to wait for the right user,” he said.

“People are looking for office space that is close to home,” broker Pat Navarette said. “They don’t want to travel long distances or fight traffic if they don’t have to.”

Lenny Gonzales, managing partner of Honda of Tomball, said commercial and residential growth played a large role in the automotive group choosing to open a Tomball location. The car dealership is targeting a fall opening date near Hwy. 249 and Spring Cypress Road.

“We chose [to open] this particular one because of the huge growth opportunity,” he said. “Tomball and the Houston area is just such a great market to do business in, [and] Texas is a great state to do business in and expand south.”

Honda of Tomball is part of the Pohanka Automotive Group based in Washington, D.C., and will be the group’s first location outside of the northeastern U.S., Gonzales said.

Although the facility is not open to the public, Storms said Restaurant Depot was drawn to Tomball because of the nearby growth.

“It is a growing area, and it’s also a convenience factor,” he said.

While commercial growth is taking off, perhaps the largest commercial development slated nearby—the Grand Parkway Town Center—has yet to begin construction at the southwest corner of the Grand Parkway and Hwy. 249. NewQuest Properties is targeting a late 2019 opening date for the 63-acre retail center. Proposed tenants include Sam’s Club and Kroger Marketplace.

“People say, ‘You ain’t seen nothing yet,’ and that’s really true,” Hillegeist said. “We’re amazed at what’s happening, but we’ve got a lot coming our way.”


Keeping up with traffic

As development continues in the Northpointe area and traffic counts rise, Precinct 4 is working to alleviate traffic on nearby roadways. Cagle said he believes North Eldridge Parkway has become a major thoroughfare connecting northern Harris County with the Energy Corridor at I-10.

As a result, Precinct 4 is widening North Eldridge Parkway from two asphalt lanes to four concrete lanes between Spring Cypress Road and Westlock Drive in Tomball, Cagle said. The estimated $6.2 million project is expected to go out for construction bids in the fourth quarter of this year.

According to TxDOT data, daily traffic on North Eldridge Parkway just north of Spring Cypress Road grew from 3,700 vehicles in 2011 to 11,664 vehicles in 2016.

Precinct 4 is also considering widening Boudreaux Road between Telge and Rocky roads, Cagle said. The project will widen the roadway from two asphalt lanes to a four-lane concrete boulevard divided by a median. No timeline or cost estimate has been released.

Daily traffic along Boudreaux Road near Shaw Road totaled 9,939 vehicles in 2016, an 88 percent increase from 2011 traffic counts, according to TxDOT.

“We have in this area an explosion of commercial development, and therefore the existing roads are under severe pressure,” Cagle said. “In relieving that pressure and providing good mobility in that area, it will allow those businesses that are already there to thrive, but it will also offer the opportunity for additional business to come and join in on that growth.”
SHARE THIS STORY

The garden at Jerry Matheson Park in Tomball features red and white roses in honor of the centennial of the Tomb of the Unknown Soldier.

Multiple developments are ongoing in Magnolia, with thousands of homes currently being constructed or planned.