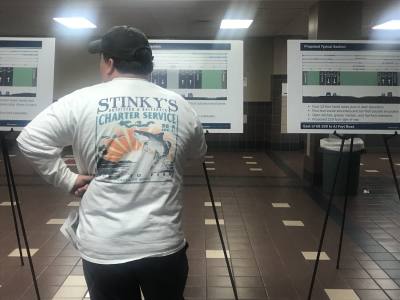 The Texas Department of Transportation is moving forward with plans to widen about a 20 mile stretch of FM2920. The proposed plan is to add one lane in each direction from Business 290 near Waller and Hwy. 249 in Tomball.

The Texas Department of Transportation is moving forward with plans to widen about a 20-mile stretch of FM 2920, as the agency expects the traffic volume on the roadway to grow by more than 85 percent by 2035, Public Information Officer Deidrea George said.

TxDOT held two public meetings Jan. 23 and 25 in Waller and Tomball, respectively, to inform residents about the proposed project.

TxDOT officials said the project will improve traffic flow, mobility and safety. The cost and funding source will be determined after the roadway alignment is chosen.

“This project is years in the making,” George said.

She said every year TxDOT, along with other agencies, must determine which projects are most beneficial to the district.

TxDOT is reviewing three alignments for the right-of-way acquisition for the roadway. However, all alternatives will cause residential and commercial displacement, George said. Residents can submit public comments through Feb. 9 on which alternative the agency should pick.

George said the expansion is slated to accommodate population and traffic growth, alleviate congestion and reduce the frequency of accidents.

“The addition of the concrete median will go a little further in separating the traffic,” George said.

TxDOT also plans to expand or improve the road medians and add sidewalks along the road, George said.

The agency will make a preliminary selection for the widening route based on public comments and whichever alternative provides a minimal impact on the homes and businesses, George said.

“This one is interesting because it is close,” George said. “Some projects that we deal with there is a clear-cut decision of which build makes more sense. This one, it may come down to some of the public comments.”

After considering this round of comments, TxDOT will make a selection, host another public meeting and receive additional public comments.

If the selection is accepted, the agency will conduct and prepare an environmental analysis and conduct a public hearing. After reviewing and considering comments from the hearing, TxDOT will finalize the environmental analysis and make a final project decision from the results of the analysis, George said. Then, the agency will begin right-of-way acquisition and complete the final design.

“We still have so much to go before we can even let this project [for a construction bid],” George said. “This process can take anywhere from months to years. It just depends.”

Comments can be mailed or emailed by Feb. 9: