'We have a lot of folks that have never needed assistance before': Pandemic amplifies food insecurity in Tomball, Magnolia

Demand for services to combat food insecurity in Tomball and Magnolia has skyrocketed due to the financial ramifications of the coronavirus pandemic, according to local nonprofit organizations.

Shirley Jensen, executive director of the Magnolia-based nonprofit Society of Samaritans, said the risk of food insecurity can increase as people deal with financial pressures caused by layoffs, shortened work hours and increased child care expenses, which is the reality for many residents during the pandemic.

“We used to get two or three calls a week for help with mortgage, rent, utilities—and now, we get five to seven calls a day. It’s ... really difficult for people to pay their bills these days,” Jensen said. “We encourage people to come and get food from us and save their cash to help pay their bills [and] expenses or help with their children.”

According to Feeding America, a national hunger-relief organization, in 2018, 14.8% of the Harris County population and 21.2% of county children struggled with food insecurity—a term defined by the U.S. Department of Agriculture as a lack of consistent access to enough food for an active, healthy life.

In Montgomery County, data showed 12.5% of the population and 18.5% of its children were food-insecure.

Kristine Marlow, Montgomery County Food Bank president and CEO, said Montgomery County has seen a greater need for food during the pandemic and that she believes higher unemployment rates this year have driven the increase in food insecurity.

The Texas Workforce Commission reported a total of 61,403 unemployment claims from Montgomery County residents from March through October, a 745.43% increase year over year. Harris County claims totaled 622,929 during that time, a 605.64% increase from 2019.

“When the pandemic began ... in March, a lot of people lost their jobs or found themselves in a place where they couldn’t pay their bills or were not able to afford food,” Marlow said. “So, the food bank ... increased their giving and the way that they were distributing food.”

“For some, that means an intermittent bout of hunger toward the end of the month when funds are low,” Cole said. “For others, it’s a constant state of hunger and reduced access to food.”

At the height of the pandemic from April to June, according to Jennifer Landers, executive director of Community Assistance Center—an essential assistance organization serving Montgomery County—the nonprofit saw a 1,043% increase in the amount of food being served to individuals.

“This pandemic is different ... from anything anyone has ever seen,” Landers said. “We have a lot of folks that have never needed assistance before that are having to come out for financial assistance [and] for food assistance.” 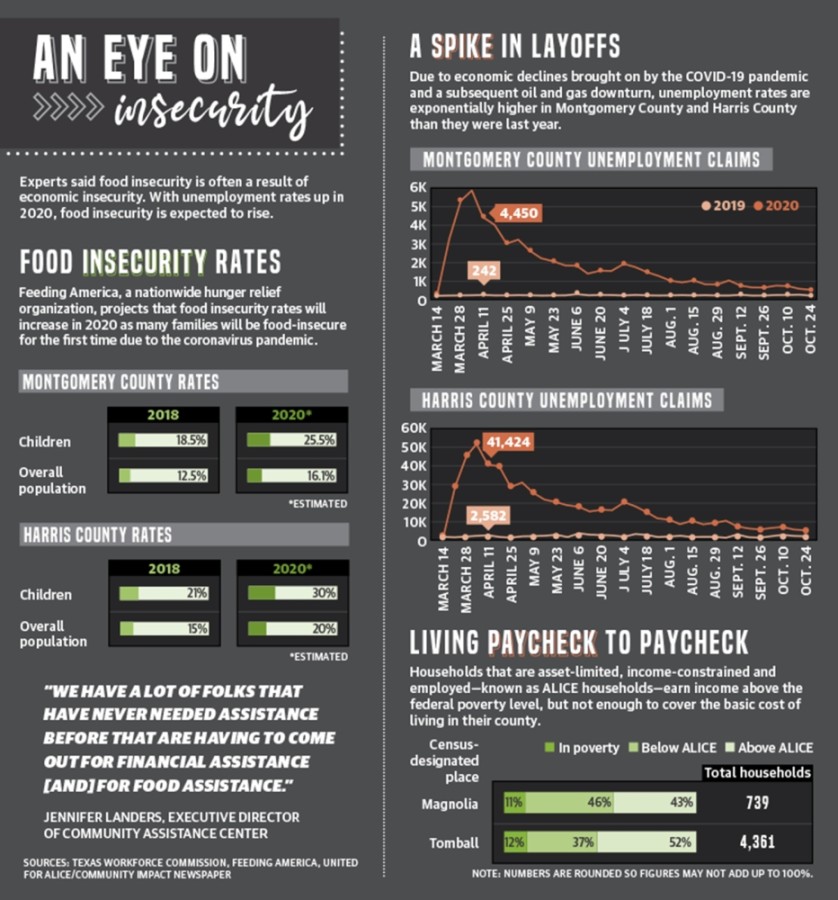 Landers said many of these new faces are from households that fall under the ALICE threshold—“asset-limited, income-constrained and employed”—according to research by United for ALICE, a national financial hardship research project. In these households, families often earn income above the federal poverty level but it is still not enough to cover the basic cost of living, she said.

“[For] some of these folks that are ... middle-class or upper-middle-class—just because they’re making great money and doing well doesn’t mean they’re not living paycheck to paycheck,” Landers said.

Local organizations and food pantries work to provide nutritious food to those in need, as food insecurity often leads to a poor diet, which can cause heart disease, obesity and other health conditions, according to the Centers for Disease Control and Prevention.

"If you’re worried about where your next meal is coming from ... or how you’re going to keep a roof over everyone else’s head, you can’t even begin to think about stabilizing,” Landers said. “A lot of the folks we’re seeing are just in survival mode.”

School districts are now partnering with the USDA to continue to offer on-campus and curbside meals free to all students regardless of financial need throughout the 2020-21 school year, the USDA announced in an Oct. 9 press release.

“As our nation recovers and reopens, we want to ensure that children continue to receive the nutritious breakfasts and lunches they count on during the school year wherever they are, and however they are learning,” U.S. Secretary of Agriculture Sonny Perdue said in the release.

Federal programs, such as the Supplemental Nutrition Assistance Program, or SNAP, can help offset the cost of groceries for low-income families. But according to Feeding Texas, the program covers only about $1.26 of the $2.80 and $2.66, respectively, it costs on average to purchase a nutritious meal in Montgomery County and Harris County. But community organizations can help fill the gap.

Kids’ Meals is one nonprofit ramping up to meet an increased demand for food services in Montgomery County. With 14 years of service in Harris County, the organization expanded into Montgomery County in 2019 to provide food for families with children too young to attend school, such as preschool age.

“These kids are off the grid. Nobody knows about them yet,” said Laran Cone, Kids’ Meals Montgomery County expansion route director. “With all the kids home and extra families coming on the program because ... they’re out of work [or] they don’t have the funds to provide, ... we’re just trying to keep them from being homeless.” 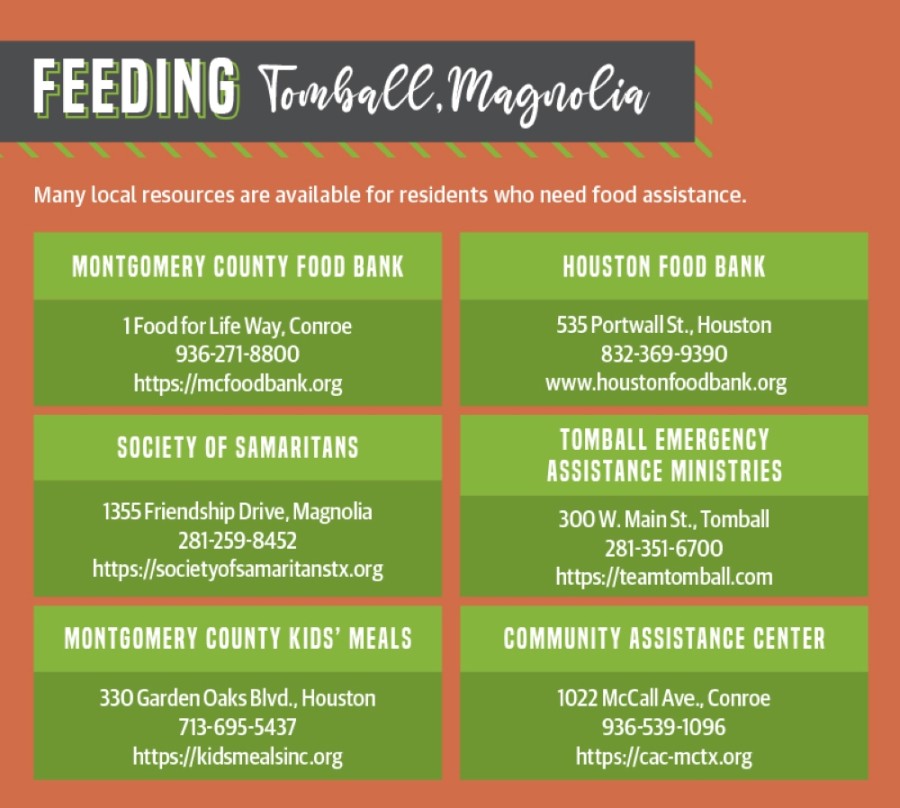 “There has been no want in that regard, but the need has increased as a result of the economic impact on the community,” he said.

This summer, Jensen said, SOS served a record number of children—an estimated 450 from June through August—through weekly backpack and snack giveaways. Now, the organization is preparing to distribute 500 boxed meal kits to families during the end-of-year holiday season.

“If anyone wants to volunteer for a couple hours a week, that would really go a long way in helping us distribute this food out to people,” Jensen said. “It’s been such a sad, unusual year. We just want Thanksgiving and Christmas just to be the very best [they] can be.”