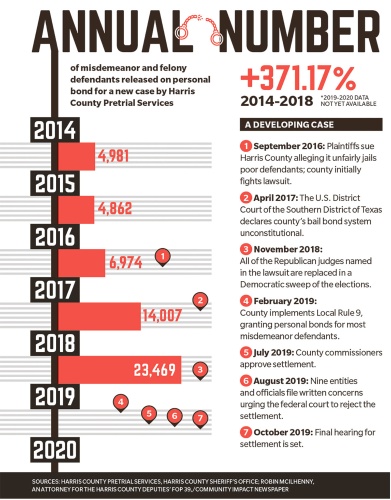 From 2014-18, the total number of misdemeaner and felony defendants released on personal bond jumped 371.17%, according to a report by Harris County Pretrial Services.

After a final hearing set for late October, a landmark settlement in Harris County could make bail reforms permanent and set the stage for similar changes across the country.

In 2016, three people charged with misdemeanors—which include crimes such as drug possession, theft and driving while intoxicated—filed a lawsuit against Harris County, alleging it unfairly jailed misdemeanor defendants who could not afford bail. In 2017, Lee Rosenthal, chief district judge of the U.S. District Court of the Southern District of Texas, declared the county’s bail system unconstitutional.

As a result, Harris County changed its bail practices to grant personal bonds for most misdemeanor arrestees in 2017, a change known as Local Rule 9. The rule requires pretrial release of all misdemeanor arrestees, excluding offenses such as domestic violence or assault.

The county initially appealed the 2017 ruling, but after a slate of Democrats were elected to judge and commissioner seats last November, the county began working with the plaintiffs in the case on a settlement.

In a preliminary ruling issued Sept. 5 on the county’s appeal, Rosenthal affirmed the settlement and consent decree, despite objections from District Attorney Kim Ogg, Precinct 3 Commissioner Steve Radack, Precinct 4 Commissioner Jack Cagle, the Harris County Domestic Violence Coordinating Council and the Harris County Bondsmen Association. The fairness hearing Oct. 28 will be the last chance for the judge to weigh in on concerns.

“[The settlement] is not very fair to victims,” Cagle said.

The decree requires the county to spend $250,000 per year in services to help arrestees make their court dates and to commit to a study to better understand why dates are missed. After the study, the county must spend $850,000 on solutions.

Ogg and Cagle said Local Rule 9 already addresses the plaintiff’s concerns in the original lawsuit. They said the settlement—which requires the county to offer defendants rides to court and to implement a text message system reminding them of their court dates—is unnecessary.

“At the core of the system, you need to have [local] judges to review every case to decide who are the ones who are at risk to hurt somebody,” Cagle said at the July 30 meeting.

On a countywide level, bail reform could alleviate overcrowding at the Harris County Jail, which houses more than 8,000 inmates on any given day, said Darryl Coleman, the chief of Harris County’s criminal justice command. According to data from the Texas Commission on Jail Standards, the average monthly number of people held in the Harris County Jail pretrial for misdemeanors dropped by about 40% from 2016-19, during the time reform initiatives were implemented.

However, the changes across the criminal justice system could take years to realize, said Precinct 1 Commissioner Rodney Ellis, who likened the settlement to “Brown v. Board of Education,” the landmark Supreme Court civil rights case in 1954 that led to the integration of public schools nationwide.

“It took decades … maybe a century to put this system in place that has been ruled unconstitutional, and we needed to make sure we were thoughtful in what we do to change it because you cannot dismantle a system like this overnight,” Ellis said at the July 30 Commissioners Court meeting.