Garbage and recycling collection services in the city of Tomball will see changes in November.

A new five-year contract approved Aug. 19 between the city of Tomball and Waste Corporation of Texas—in effect from Oct. 1, 2019, to Sept. 30, 2024—allows residents and business owners the option of using poly cart containers or continuing the current bagged service. This is the first time the city has offered the choice of poly carts, which are plastic, for garbage and recycling service, Public Works Director Beth Jones said.

"They'll be able to use the WCA poly cart, or they can still put their bags out, but it's one or the other," Jones said. "We're pretty excited about being able to offer both services. So if you want a poly cart, you can get a poly cart and start using that, or you can stay with the bags."

Tomball City Council members approved changes to the city's garbage collection and disposal service rates during an Oct. 7 meeting. According to an Oct. 4 letter to residents, the rate for residential garbage collection remains the same at $15.70 per month if using the current bagged service for trash and the 18-gallon recycle bin.

"If you decide to do a poly cart for the trash, then you need to use the poly cart. You don't pile up bags next to it in addition. But if you're a big trash user and you'd like to get a second trash poly cart, we offer that option," Jones said.

According to city information, poly cart collection will begin Nov. 18, although residents may receive poly carts before then. Jones said she anticipates customers receiving poly carts in early November. To request the carts, residents must complete an order form, which can be found on the city's website. Order form collection will be ongoing throughout the year with carts delivered on a first-come, first-served basis, Jones said.

Garbage collection will continue on Mondays and Thursdays. Heavy trash will also still be collected on Thursdays, Jones said. Residents can request a special collection at an additional charge for combined bulk waste and brush in excess of 2 cubic yards per week, according to city information.

City information advises residents to place the closed poly carts at least 3 feet apart near the curb or no more than 3 feet from the curb or roadside. Carts must be put out for collection no earlier than 5 p.m. the day before pickup and removed no later than 10 p.m. on collection day.

Should residents need assistance placing their bags or carts out for collection, the city offers a Citizens Assistance Program. Residents must complete the doctor-signed form to be eligible for this program.

More information about the city's residential garbage and recycling services can be found on the city's website.

For businesses, garbage collection and disposal service rates increase Nov. 18, according to an Oct. 4 letter to commercial customers.

"There was definite citizen request and desire to do [the poly carts]. The challenge was that there were also lots of citizen requests to stay with bags—both felt passionately—and really trying to find a solution that made everybody happy," Jones said.
SHARE THIS STORY 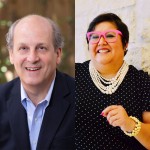 With all election day precincts reporting, Santini has garnered 78% of total votes.

However, the county reported its largest daily increases in active and total COVID-19 cases July 14, along with two additional deaths related to the disease.