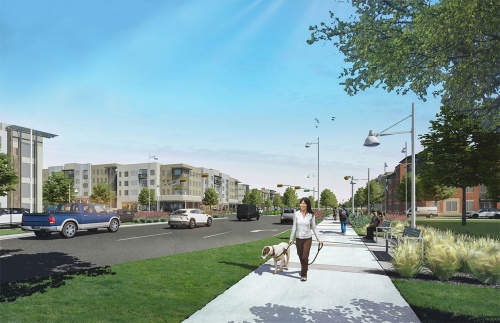 An update to the city of Tomballu2019s comprehensive plan, a long-range guide for the cityu2019s future, proposes incentivizing private landowners to redevelop Business 249 into a walkable, mixed-use area. The plan is set to be adopted by council this fall.

Editor’s note: This is the first article in a series about an update to the city of Tomball’s comprehensive plan. Council members approved the comprehensive plan update during an Oct. 8 meeting, which was after press time for the Oct. 8 Tomball-Magnolia edition of Community Impact Newspaper.

Before Hwy. 249 frontage roads were extended through Tomball, Business 249 was the main north-south route through the city. In the decade since, traffic counts on Business 249 have fallen almost 60%, according to data from the Texas Department of Transportation.

“Today, [Business 249 is] kind of almost secluded off of the Tomball Tollway area. You have to be proactively trying to get there,” Halff Associates representative Matt Buccin said during an Aug. 19 joint City Council meeting with the Tomball Planning and Zoning Commission.

Halff Associates Inc. prepared an update to the city’s Vision 2030 comprehensive plan, which proposes revitalizing the Business 249 corridor—colloquially known as Tomball Parkway—by creating a walkable district where residents can live, work and be entertained. The plan proposes fewer driving lanes, multistory buildings, and a mix of multifamily, retail and office spaces, according to the draft plan.

The frontage roads of the Tomball Tollway—the tolled portion of Hwy. 249—opened in Tomball around 2008, Community Development Director Craig Meyers said, driving traffic around the city instead of through the business corridor. In April 2015, the Tomball Tollway opened to drivers.

“When we look at where development is happening, much of it is happening outside of the [Business] 249 corridor, and that’s where this [proposal] really is an opportunity to kind of focus on a space where there’s a real opportunity to draw people there, to bring people off the tollway, to give them a reason to not go over Tomball but to come through Tomball,” City Manager Rob Hauck said. “Or, maybe give them other options so they can live in Tomball.”

The updated plan was approved by Tomball City Council in the first of two votes Sept. 16, and city staff anticipates implementing the plan after a second vote in October. Council members approved the comprehensive plan update during an Oct. 8 meeting.

“It’s just a vision. It’s just a plan. It’s not set in concrete, but it does give us some guidance, especially in terms of future land use,” Council Member John Ford said.

Between Jan. 1, 2012, and Sept. 1, 2019, the city issued 83 commercial permits for new construction, remodels, additions and build-outs along Business 249, according to data from a Community Impact Newspaper public information request. The 10 new construction permits issued include Raising Cane’s Chicken Fingers and Freddy’s Frozen Custard & Steakburgers, the latest developments coming to Business 249 according to company representatives.

“This Cane’s location on Business 249 will drive Tomball customers to this lower-traffic area of Tomball,” said John Segura, market leader of marketing for Raising Cane’s.

Raising Cane’s is slated to open Oct. 29, Segura said. Freddy’s  could not provide an opening date.

Despite new development, the comprehensive plan anticipates further disinvestment in Business 249 in the coming years based on an uptick in development along FM 2920 and the ongoing extension of Hwy. 249 through Montgomery County, the plan reads.

Fred Sembera, owner of Pecos Grilling Co., which opened at the north end of Business 249 in 2004, said he saw business drop significantly after the tollway opened but has continued to see fewer customers as traffic at the intersection of FM 2920 has intensified.

“Before, everybody going north and south drove in front of the restaurant. Now, I feel like I’m on a dead-end street, because all I get is some northbound traffic,” he said. “You can get out of town, but you can’t get into Tomball going southbound unless you go through the intersections with a lot of lights.”

Unless traffic patterns change, Sembera said he believes there is little keeping his and neighboring businesses from closing.

Although most spaces are occupied, Joel English, the president of commercial real estate firm Texas CRES and a member of the comprehensive plan advisory committee, said rental rates along Business 249 indicate lower business interest. Rental rates on Business 249 are in some cases as little as half the rent at FM 2920 and Hwy. 249, he said.

“If your occupancies are low, [you] just keep cutting rent until you get it filled up,” English said.

A renewed effort to focus on the Business 249 corridor could provide the city revenue via economic development, reduce the need for increasing development elsewhere in the city and offer prospective residents a destination area to call home, according to the draft comprehensive plan.

The plan’s revitalization proposal calls for six-story buildings west of Business 249 and four-story buildings to the east featuring office, retail and multifamily projects.

“You’re plugging in all types of commercial ventures with the people right there along with it,” Ford said. “It would still be the intent of having a cozy but vibrant, attractive space that the city could do more and the citizens could do more with and have more options.”

The plan also proposes parking structures located behind buildings and regional stormwater detention areas. To provide space for walking paths, a landscaped median and benches, the number of lanes on Business 249 could be reduced, according to the draft plan.

As the road is owned by TxDOT, the city would have to either acquire the corridor or meet TxDOT’s criteria for sidewalk and beautification improvements, Meyers said. Since no discussions have taken place about acquiring Business 249, the cost of doing so is unknown, he said.

To make this vision a reality, the comprehensive plan recommends city officials prepare a study to look at how to transition a single-story corridor into a mixed-use, multistory walkable district. A new zoning district and development standards would be necessary to guide redevelopment, according to the plan.

Meyers said the city could offer redevelopment incentives to landowners, similiar to what the city has previously offered tenants in the Old Town area, but the city would not forcibly change existing properties.

“This is a real opportunity to transition between that Old Town character corridor [and] the large-box store area of town,” Hauck said.

The draft comprehensive plan outlines revitalizing Business 249 as a long-term objective, taking 10 years or more to implement. Although city officials could not give a time estimate, Hauck said he believes the project is feasible over time.

This proposal would allow denser housing and business options in a single corridor rather than pursuing higher-density development throughout the city, according to the plan.

“This allows the city greater latitude in focusing on protecting the small-town charm and feel and rural character of most of existing areas of Tomball,” the plan reads.

During a joint meeting Aug. 19 between City Council and the planning and zoning commission, Bucchin and city officials likened the Business 249 proposal to mixed-use projects elsewhere in Texas, such as Cedar Park’s proposed Bell Boulevard project, Leander’s proposed Northline project, The Domain in Austin and Sugar Land’s Town Square.

“That’s what we need for this area,” said Barbara Tague, planning and zoning commission chair, on Aug. 19. “I think it’s a good idea.”

However, efforts to revitalize the corridor would require significant private investment, Meyers said.

“It’s going to take a lot of private developers to really buy in on this. We have the vision that we think is great, but we need participation from landowners to make this happen,” Meyers said. “It starts with one, and then others will come.”

“We have the opportunity to mold [Business 249] into something that can really be amazing for the city,” said Kelly Violette, executive director of the Tomball Economic Development Corp.