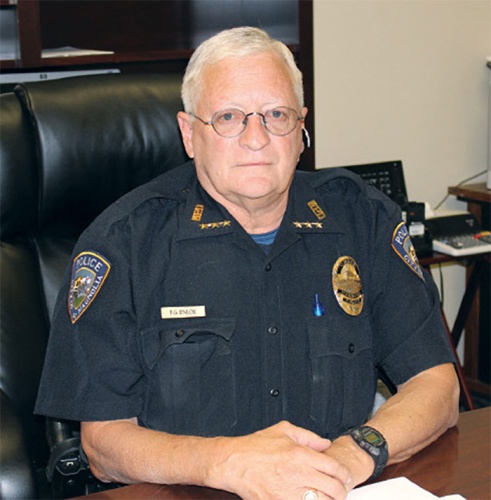 Magnolia Police Department Chief Terry Enloe will retire by the end of October, he said, after just over four years serving Magnolia.

Enloe said he has worked in law enforcement since 1975, marking 44 years in the profession this September.

Enloe did not announce his official retirement date as of publication Oct. 8. Enloe said he is unsure of an exact date, as he wants to work on a few projects—including securing grants for an indoor shooting range for law enforcement personnel—before he leaves.

Since joining the Magnolia Police Department in May 2015, Enloe said he has tried to change the culture and policing mentality. He has hired new staff, added training sessions, remodeled the police station, and added five new police cars and an evidence facility, he said.

Lt. Kyle Montgomery, with MPD since 2007, said he has served several years under Enloe’s leadership.

“The moment you hire on with us, [Enloe] treats you as family. Being that everyone knows he truly cares about us, it makes us willing to follow him through any situation,” Montgomery said in an email. “Chief Enloe has been the true definition of leadership and a personal mentor.”

Throughout his 44-year career, Enloe said his position at MPD has been the most rewarding.

“It’s a calling. I was probably 13 or 14 when I knew what I wanted to do [for my career],” he said. “Nothing has been more rewarding than where I am now. It’s a good way to end the game.”