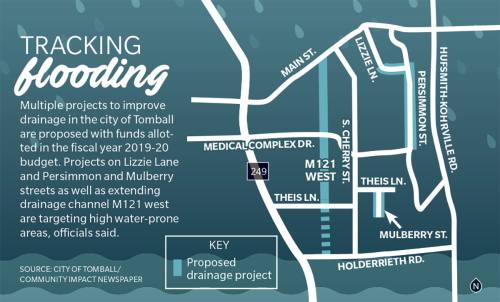 Multiple projects to improve drainage in the city of Tomball are proposed with funds allotted in the fiscal year 2019-20 budget. Projects on Lizzie Lane and Persimmon and Mulberry streets as well as extending drainage channel M121 west are targeting high water-prone areas, officials said.

The city of Tomball has budgeted about $407,000 for drainage improvements in fiscal year 2019-20 to keep drainage a priority, Assistant City Manager David Esquivel said.

Drainage projects are proposed for Mulberry and Persimmon streets and Lizzie Lane, and about $50,000 is slated for drainage improvement planning, budget information shows.

Esquivel said these areas, while still in need of improvements, fared well during Tropical Depression Imelda, which hit the Greater Houston area Sept. 19.

The city is also working on the third segment of constructing the M121 west drainage channel from Theis Lane to Holderrieth Road west of Cherry Street, Public Works Director Beth Jones said. Pipelines are being relocated for the project before a contractor can begin digging the drainage ditch, she said. Construction bids will be sought by early October, Esquivel said.

In the heart of the city, ditches will be added to Lizzie Lane and Persimmon Street to flow water to Willow Creek, Esquivel said.

During a July 15 meeting, Tomball City Council authorized City Manager Rob Hauck to negotiate services with engineering firm Costello for improvements on these roads. Funding for the projects comes from an almost $1.6 million grant from the U.S. Department of Housing and Urban Development’s Community Development Block Grant Disaster Recovery program and a local match of roughly $200,000, Esquivel said.

“That area is one of the areas that traditionally floods in Tomball,” Jones said.

Elsewhere in the city, about $157,000 is budgeted to improve Mulberry Street, according to budget information. Esquivel said the street was not always under city jurisdiction, so it was not developed to current city standards. This has caused high water levels as new development has come.

“One of [our city development] standards is to outfall [drainage] into a city street. In this case, [drainage] has to go through Mulberry, but Mulberry is not designed to any standard other than when [the land around it] was rural and undeveloped,” Esquivel said.

Plans are in the design phase to have stormwater connect to a drainage channel in the Medical Complex Drive and Cherry Street area, Jones said.

“People like to look at development as the big bad wolf and that’s the cause of all the drainage issues, but usually new development has more strict criteria they have to follow whereas [older] development, they didn’t even have criteria,” she said. “The new development can just shine a light on the issue, and this is a way for us to remedy some of those pre-existing conditions.”