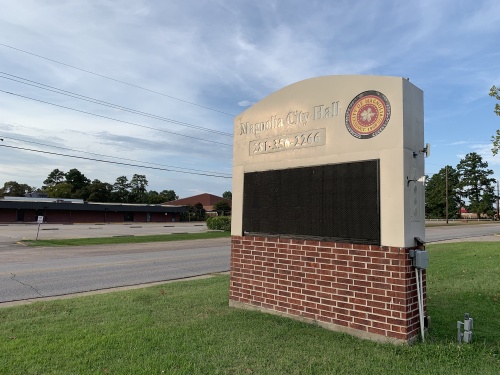 Magnolia City Council members approved a signage package for the proposed H-E-B in the Golden Triangle area between FM 1488, Spur 149 and FM 149. A 45-foot sign was included in the package.

A 45-foot sign for the future H-E-B site will stand at the northeast corner of FM 1488 at Spur 149 following a Magnolia City Council vote Sept. 10.

The original signage package for the grocery store—which is part of Magnolia Place, a 120-acre mixed-use development by development company Stratus Properties Inc.—included a 60-foot sign, but council members were opposed to that idea and asked for additional information and visual examples to gain perspective.

The city’s regulations in the Unified Development Code at the time of the agreement—signed in 2014—only allowed for ground signs up to 30 feet tall, as Community Impact Newspaper previously reported.

A vote on the signage package was delayed from the Aug. 13 meeting to the Sept. 10 meeting. Council, H-E-B and Stratus came to a compromise for a 45-foot sign.

"We went back and flagged the site ... to kind of see what visibility there is. The biggest issue is we've got a lot of trees in one direction that obscure a lot," said John Rose, senior due diligence manager for H-E-B, during the meeting. "After moving everything around, we can get to 45-feet and still feel comfortable and still draw people from outside of our area, which is critical to us being successful."

Three other signs for the grocery store are included in the signage package, as are signs for multitenant retailers, according to Chessie Zimmerman, Stratus representative and development manager for Magnolia Place.

In addition to H-E-B, the development will also include between 35,000-40,000 square feet of retail space, several pad sites, 14.6 acres of multifamily space, single-family homes and townhomes as well as a 200-square-yard gathering space in the center of the project, according to Zimmerman.

Potential tenants could also include medical spaces as well as hotels, Zimmerman said.

"Magnolia is going to be our town as well, and we want to be part of this community," Rose said during the meeting.