The Tomball Economic Development Corp. is pursuing a feasibility study to bring a culinary incubator space to the city of Tomball to support startup culinary businesses.

Editor’s note: The opening of Bexar Barbecue has been delayed to early 2020.

The incubator space could include a commercial kitchen, open for food entrepreneurs to rent by the hour or day, and a food hall—similar to a mall food court—open to the community where all of the vendors are local businesses, Violette said.

The TEDC is looking to hire a consultant to study the feasibility of a culinary incubator in the next few months, TEDC Assistant Director Tiffani Wooten said. The feasibility study will examine the usefulness of a facility in Tomball, including community needs and resources available for the project.

“[This idea] came out of the growth and success of the Tomball Farmers Market and the businesses that are growing out of that,” Violette said during an annual TEDC update during a June 17 City Council meeting.

Tejas Chocolate & Barbecue, Pain Train Salsa, Caroline’s Kitchen and BZ Honey are just a few businesses that have opened in downtown Tomball after finding success at the Tomball Farmers Market—held each Saturday on Main Street since 2009.

“It’s slowly starting to transform not just our downtown but our town as far as being kind of a food destination,” Violette said. “One of the challenges that came up in discussing this with some of these businesses is a lack of space that’s available for them when they’re … ready to move to the next step [from the market].”

Justin Haecker, the owner of Bexar County Brisket—a TFM vendor for more than 3 years—said he plans to open his restaurant, Bexar Barbecue, in early 2020.

“Essentially the demand of our customers and our clients outgrew what we were able to produce as a once-a-week, part-time gig,” he said.

Haecker said he chose to locate his restaurant outside city limits—on Hufsmith-Kohrville Road in Tomball—because of limited space available within the city, the lack of parking spaces and the cost of modifying an existing building.

Over the last year, the TEDC has visited various culinary kitchen concepts in Atlanta and Nashville to get ideas for the Tomball community, Wooten said. The facilities toured included components such as shared commercial kitchen space and a food hall, she said.

The food hall concept would enable culinary entrepreneurs to create a permanent menu and signage, operate five days a week and learn to train employees while still not having high overhead costs—a stage between the farmers market and a brick-and-mortar storefront of their own, Bundy said.

Bundy said her long-term vision for the incubator facility also includes a pavilion for a secondary farm and artisan market, greenhouses for local students to learn about agriculture, and offices for a small-business association to help vendors write a business plan and model.

“Basically just step by step for business growth is the dream,” she said.
SHARE THIS STORY 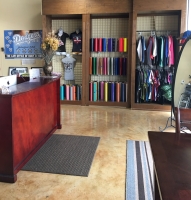