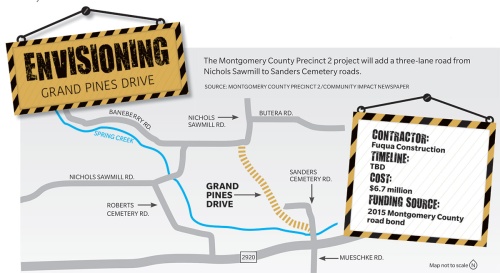 The $6.7 million project—which is constructing a new three-lane road from Nichols Sawmill to Sanders Cemetery roads in the Magnolia area—has faced several delays from the U.S. Army Corps of Engineers, Riley said.

Construction originally was slated for spring 2018 by Fuqua Construction, but the Corps asked the county to compensate the construction impact for an additional 0.8 acres of wetlands before road construction could begin, Riley said. A decision has still not been reached as to a time frame for when construction may begin.

Riley said this project will ease traffic congestion on Nichols Sawmill Road and create a safer alternate route to FM 2920 for drivers.

“The Corps issued a declaration that they had found more wetlands and put a stop to us doing any kind of construction. We’ve been dealing with that alone for almost a year,” he said.

The location of the wetlands potentially lies in jurisdictional territory, which means the area is in federal control rather than county control, Riley said. This means the county must comply with whatever the Corps determines in order to compensate the impact of construction.

On Nov. 30 a representative from the Corps searched along the project length to determine whether the area is in jurisdictional territory and for signs of wetlands, Riley said. They did not see any potential issues, he said.

Bob Heinly, deputy chief of the regulatory division for the Corps, said the Corps will have a final decision to the county by January as to the road’s future, but he said it is unclear when construction may begin. A construction start date is pending coordination with the Environmental Protection Agency and another permit application from Precinct 2, Heinly said.

As long as the permit aligns with the nationwide permit program—which has a 45-day approval window—Grand Pines Drive will break ground in 2019. If not the county could face a two-year delay while waiting for another permit, Heinly said.

The delay may cause an increase in the construction cost, but Riley said the project will continue regardless.

“We will work with [the county] to help develop the project guidelines within the nationwide permit program, which will allow a quicker turnaround on construction,” Heinly said.
SHARE THIS STORY