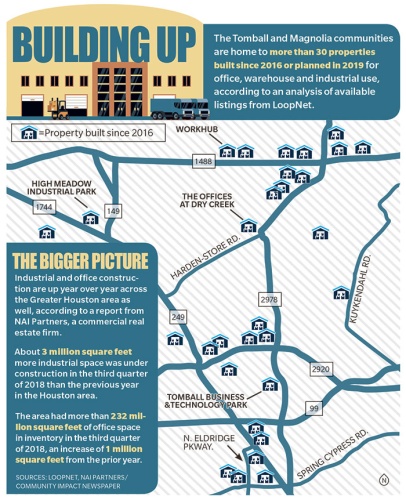 The Tomball and Magnolia communities are home to more than 30 properties built since 2016 or planned in 2019 for office, warehouse and industrial use, according to an analysis of available listings from LoopNet.

The Tomball and Magnolia communities are home to more than 30 properties built since 2016 or planned in 2019 for office, warehouse and industrial use, according to an analysis of available listings from LoopNet.

The Tomball and Magnolia communities have seen more than 30 complexes either built in the last two years or planned in 2019 for office, industrial and warehouse use, according to an analysis of available listings in November from LoopNet, a commercial real estate listing service.

Local developers and economic development experts attribute the number of new properties to a growing residential population, ongoing thoroughfare projects and the available space to build in Tomball and Magnolia.

“Some people might see office parks going up and [wonder], ‘Why do we need one?’” said Hannah Thibaut, leasing consultant for Workhub, a real estate development company in the Magnolia area. “Well, that means there’s growth here. That means people are moving here for a reason. People are bringing their business here for a reason. Ultimately that can generate more jobs.”

Workhub finished construction of its office and industrial campus on Corporate Woods Drive, Magnolia, in May after completing four similar projects on Tamina Road in early 2017, Thibaut said.

“We came out to Magnolia because it’s right on the outskirts of The Woodlands, so a lot of the businesses are wanting to expand and grow, and there’s just not that real estate available near their homes,” she said.

Tomball and Magnolia are becoming more accessible through thoroughfare projects such as the Grand Parkway—segments F-1 and F-2 of which were completed in Tomball in 2016—which bring businesses outward from Houston, said Kelly Violette, executive director of the Tomball Economic Development Corporation. The TEDC oversees the Tomball Business & Technology Park, which celebrated the opening of its second tenant, SUEZ Water & Technologies, in October.

“I think population growth is really driving activity for us along this north corridor coupled with the fact that we have these major infrastructure projects [underway],” Violette said. “In the past, Tomball seemed like it was really far out there ... and that’s not really the case anymore because of those roadways and because of the growth that we’ve seen.”

Ample office and industrial space is important to the vitality of a community, Violette said.

“What provides the long-term sustainability for a community is the ability to have primary employers, so those that are producing things—goods and services—that are exported outside of the region. And money then is brought into the region,” she said. “That in turn drives some of those secondary type jobs. It’s important to have that, because if you don’t have the jobs, then you don’t have the retail [and] you don’t have the rooftops.”

Thibaut said startups and small businesses, particularly those in the oil and gas industry, make up Workhub’s tenant base.

“We really wanted to target The Woodlands market that comes into the Tomball/Magnolia sector—where ... people are working out of their home office—and give them an office to come to with also having storage capabilities or distribution capabilities,” she said.

Lewis Walker, development director for The Offices at Dry Creek, said he seeks to draw financial planners, attorneys, real estate agents and other private companies from the neighborhoods close by to his new complex. The Offices at Dry Creek, located at the corner of Hardin Store Road and FM 2978, will feature 50 units at buildout. About 12 units are expected to be ready for tenants in February.

“These were built really to service the professionals that live within a 3- to 5-mile radius,” Walker said. “We have a good demand out there in a high-growth area.”

As more residents move to the area, their businesses follow, said Art DePue, developer of High Meadow Industrial Park. The industrial park celebrated its grand opening in August on FM 1774 featuring 14 lots ready to build on for office, warehouse and manufacturing use.

“I think the road construction is really bringing people out. [FM] 1774 is almost done, [Hwy.] 249 is in the process, and it’s moving fast. I think it’s all bringing it out here,” DePue said.