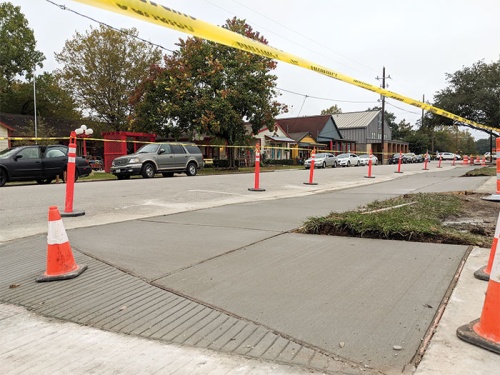 The city of Tomball is slated to begin enhancing the first block of alleyways in Old Town Tomball in 2019 to improve walkability, safety and aesthetics downtown. While a burgeoning visitor base strains Tomball’s parking capabilities, additional sidewalk projects are ongoing to create a more pedestrian-friendly community, city officials said.

“The goal really is ... just create a more walkable and rideable community where we can,” City Manager Rob Hauck said.

Business owners said parking is a challenge escalated by new developments and increased tourism, both of which draw visitors to Old Town—sometimes thousands at a time. Total attendance topped 26,000 people at city-sponsored festivals in September and October, Hauck said.

“I just feel like they didn’t plan for all this growth so quickly, and nobody has a place to park,” said Kim Vickers, co-owner of Wigs with Style on Commerce Street. “I don’t know what the answer is.”

Parallel parking spaces were removed along Main Street in fall 2016 as part of a Texas Department of Transportation project to add a center turn lane from Pine to Elm streets. Business owners lost parking in front of shops as a result.

To compensate for lost street parking and to accommodate growth, city officials said they are linking sidewalks, upgrading alleys behind businesses and searching for new parking areas to alleviate parking pressure in Old Town—the four blocks from Pine to Elm streets.

“We’re constantly looking for places and ways to enhance and increase parking because we know it’s a challenge,” Hauck said.

City officials have been working to link existing sidewalks throughout Tomball since 2009 with hopes to create a robust sidewalk system, city officials said.

The Houston-Galveston Area Council partnered with the city of Tomball in 2009 to draft a Livable Centers Study, a plan recommending infrastructure and design improvements in Old Town to foster walkability and connectivity. This plan and the city’s comprehensive plan in 2009 birthed the concepts for the ongoing sidewalk projects, Hauck said.

“Usually every summer or spring we all put our heads together and try to figure out where the gaps are, and then we propose those [sidewalks] for the budget,” Tomball Community Development Director Craig Meyers said.

In total the city has allocated more than $3 million for sidewalk and alleyway projects since fiscal year 2009-10, according to budget data.

Crews began work on the latest round of sidewalk projects this fall. City Council members unanimously approved a contract Oct. 1 totaling $262,660 for contractor Greenscapes Six to add sidewalks along portions of Commerce, Walnut, Market and Lawrence streets as well as Theis Lane.

Esquivel said these sidewalk additions are expected to be complete by the end of 2018 and will finish linking sidewalks north to south from Zion Road to Theis Lane.

“Now that there’s safe places for people to walk off the streets, I think it makes people more comfortable to walk downtown, and they’re more willing to stay downtown,” Meyers said. “I think it’s going to help with getting more people to come downtown, and businesses would thrive more.”

This fall the first sidewalks were added to a portion of Commerce Street.

“I think it’s great. With parking being taken away on Main Street, it’s put a lot of parking pressure on the side streets,” he said. “More pedestrian traffic is better for businesses down in our area for sure. It just allows us all to connect a little bit better and create some flow.”

Improvements to enhance the alleys within the 100-400 blocks of Main Street are also slated for the next few years, city officials said. The multiyear project will begin with the 100 blocks north and south of Main Street bordered by Walnut and Elm streets, Esquivel said.

Meyers said the alleyway improvements may be sent out for a construction bid in summer 2019.

“When we’re having a festival or on the weekend where there’s not normal business traffic, we want those alleys much easier to cross,” Hauck said.

Proposed improvements include resurfacing the alleys with stamped concrete and installing lighting, Hauck said. Additionally crews will add sidewalks wrapping around the block and light poles to the sidewalks.

“These are still service alleys. They are still going to have trash [and delivery] trucks driving down,” Hauck said. “We’re going to look to add some stamping or some coloring to spruce those alleys up and make them look a little nicer than just an asphalt alley.”

In addition to safe crossings, Hauck said the wraparound sidewalks are important for businesses.

“Those businesses still aren’t set up to enter from their backdoors, so we wanted to [ensure] that walkability to the front of all the businesses as well to easily get across the alley from one business to the other and move around the festival area safe[ly],” he said.

Shannon Wilson, owner of Kid’s Anthem on Main Street, said she is looking forward to the upgrades, as the boutique’s parking area in back is accessed by the alleyway.

“I’m over-the-moon excited,” she said. “Any improvement in Tomball to help customers be able to navigate from each store, to be able to park and walk them all is wonderful.”

Wigs with Style relocated from Main Street to Commerce Street in March 2017 to restore customer parking, Vickers said. The business’s new home features a few parking spaces, which are necessary for her customers who are unable to walk far, she said.

“When they took our parking, it almost completely shut down our business,” she said.

To help with parking, the city more clearly outlined parking on side streets, Hauck said. Additionally the city added 248 spaces in 2013 between lots on Elm and Fannin streets as well as a lot acquired from Tomball ISD, Meyers said. In total there are 544 public parking spaces in Old Town, according to city information.

TxDOT’s work also removed the midblock street crossings on Main Street, but Hauck said there are no plans to replace them, as the removal was motivated by safety concerns. Instead Hauck said the city is focused on creating a better system of sidewalks to get people to signalized crossings.

With a more robust sidewalk system the city could search for parking areas farther out, Hauck said.

“As we continue to make the area more walkable, we can then even start looking for or utilizing parking options that are a little farther away because we will make it easier for people to get from Point A to Point B,” he said.

Annual German festivals hosted by the Tomball Sister City Organization offer guests a free shuttle service from the medical district to festival grounds, as attendance regularly tops tens of thousands of guests between two days. However, city-sponsored events have not historically featured a shuttle.

“Our [festivals] stay within the 2,000-3,000 people attending that it’s not been to that point before where it really needs that shuttle service,” Esquivel said.

Hauck said the city is considering a parking area at the corner of North Cherry and Commerce streets although additional parking improvements are not funded at this time.

The proposed parking area would feature about 10-12 spaces and could come before City Council for approval as early as summer 2019, Meyers said.

While the city is conscious of the need for more parking in Old Town, vacant land is scarce, and development rules for the historic area do not demand the same parking availability as elsewhere in the city, Hauck said.

“Every one of these things is a balancing act,” Hauck said. “The Old Town area is a much more compact, dense area with smaller streets, smaller lots [and] with smaller sidewalks.”
SHARE THIS STORY