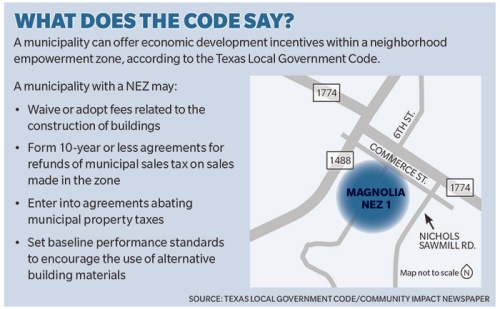 A municipality can offer economic development incentives within a neighborhood empowerment zone, according to the Texas Local Government Code.

“It’s a [tool] to allow you to designate an area to provide incentives to spur economic growth,” City Attorney Leonard Schneider said during the meeting. “It’s very flexible, in fact.”

Schneider said the creation of a NEZ stemmed from a development agreement between the city of Magnolia and PHP-314 Equities, a firm developing Magnolia’s first mixed-use complex slated for Commerce Street, that the city would create a NEZ.

Council members moved Aug. 14 that creation of a NEZ would promote an increase in economic development in the area.

“They seem to be pretty prolific throughout the state of Texas,” Schneider said. “A lot of small towns are using them; a lot of mid-sized towns are using a NEZ as the ability to try to attract economic development to the cities.”