Hwy. 249 extension to Spring Creek on track for 2019 opening, additional openings to extend road to Magnolia in 2020 and Navasota in 2022 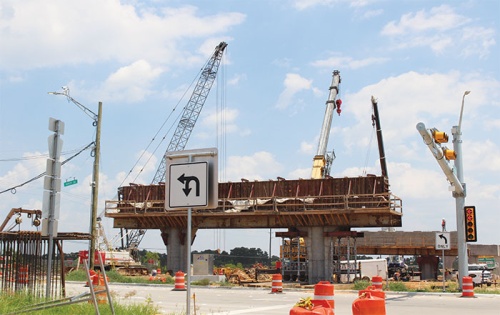 The Harris County Toll Road Authority is extending the tolled portion of Hwy. 249 from FM 2920 in Tomball to Spring Creek.

Nearly 20 miles of Hwy. 249 are under construction in the Greater Tomball and Magnolia areas, with 10 more miles of roadway slated to break ground by year’s end to keep pace with population and traffic growth throughout the region, transportation officials said.

The long-awaited thoroughfare project is set to improve mobility and open as soon as December 2019 in Harris County and in early 2020 in Montgomery County, officials said.

“I’m so excited about [Hwy.] 249,” Montgomery County Precinct 2 Commissioner Charlie Riley said. “My daddy told me years ago that there was going to be a highway through here, but I wouldn’t live long enough to see it. Well, if I can make it to February 2020, I’m going to get to see it. That’s exciting to me. I just can’t wait to see what it does for this part of the world.”

The Harris and Montgomery county toll road authorities are working with the Texas Department of Transportation to extend Hwy. 249 from FM 2920 in Tomball to Hwy. 105 in Navasota. While construction is ongoing for three of the four project segments, TxDOT anticipates beginning the final segment by year’s end in Grimes County, said Leslie Hollaway, public information coordinator for TxDOT’s Hwy. 249 project.

Although officials said the road has struggled to gain community support in areas of Montgomery and Grimes counties—particularly in relation to funding from toll revenue and acquiring right of way—all funding for the road is in place, and officials said they believe community feedback has been largely positive.

“The road has really—as it’s progressed—become more accepted,” said TxDOT’s project manager Eric Bennett. “Now, I think the excitement for it to actually happen is starting to happen.”

HCTRA, which is extending the tollway from FM 2920 to Spring Creek for Phase 2, celebrated the opening of its new southbound and northbound frontage roads in May and July, respectively—the latest milestone for the $99.3 million phase of construction.

“We are going to be focused on the main lanes,” Deputy Director of Engineering John Tyler said. “As soon as we shifted traffic to the permanent southbound lanes, [crews] were able to sort of get a jump start on that construction.”

HCTRA is targeting a December 2019 opening date for the 1.7-mile portion of tollway, which will connect to the Montgomery County Toll Road Authority’s segment in Pinehurst, Tyler said.

“We rely totally on [MCTRA’s] section being completed for ours to function,” he said.

When completed, Tyler said he anticipates vehicle transactions along the Tomball Tollway to increase about 10 percent, based on a traffic and revenue study performed ahead of Phase 1 construction. He said the tollway sees about 18 million transactions annually.

The extension project will not add another main lane toll plaza despite the expected increase in vehicle transactions, Tyler said. As a result, drivers on the tollway can travel a greater distance for the same cost—$1.50 at the 2018 rate.

“It’s hard to say revenue wise what’s going to happen,” he said. “[Toll prices are] not going to increase just because of the completion of this project.”

MCTRA and TxDOT broke ground on portions of Hwy. 249 earlier this year in Montgomery County. With right of way cleared for the tolled main lanes of MCTRA’s 3.6-mile segment from Spring Creek in Pinehurst to FM 149, the project is picking up speed, Riley said.

MCTRA—made up of Montgomery County commissioners—sold nearly $89 million in revenue bonds in June, which provided funds for construction as well as repayment to the county for loaned funds, Riley said. The revenue bonds will be repaid from revenue generated via toll fees paid by drivers.

“It’s going to make this side of the county so much more enjoyable, [the] quality of life so much better,” he said. “People aren’t going to be spending most of their time in their vehicles. They can actually get from one side to the other and have time with their families.”

The extension of Hwy. 249—paired with ongoing improvements to FM 1774 and FM 1488—will provide a quicker, safer route for Magnolia drivers traveling to Houston and Navasota, Riley said.

By traveling on the tollway from Spring Cypress Road to FM 1774 instead of frontage roads, the CDM Smith study projects drivers will trim northbound commutes by 16 minutes during evening traffic in 2022 and 26 minutes in 2040.

“TxDOT may be just a little bit behind us farther west, but our plan is to try and get [the segments] all together at pretty much the same time,” he said.

Segment 1 of TxDOT’s portion, a four-lane tollway totaling $347 million, is anticipated to open in late 2020 with intermittent frontage roads, while Segment 2—a $173 million two-lane, non-tolled highway from FM 1774 in Todd Mission to Hwy. 105 in Navasota—is set to open in early 2022, Hollaway said.

Right of way acquisition and design for Segment 2 are ongoing.

“It’s such a rural corridor that really the sentiment overall has been very positive,” Hollaway said.

However, some local entities throughout the area have grappled with construction. Pastor Joe Arms, of Believers Fellowship Church, formerly located on FM 149, said final roadway design placed the road too close to the church, causing Believers Fellowship to vacate in late June, moving to property on FM 1488 at Old Hempstead Road.

“We certainly knew it would impact us because we would have to move,” Arms said. “Our biggest impact was trying to find properties that were equal to the size and the scope that we had there for the right money.”

Riley said the Hwy. 249 extension has garnered positive support from residents west of FM 2978. However, some community members have expressed dissent with tolling the new roadway.

“Something was needed out there with the traffic flow. I wish it hadn’t been a toll road; I don’t think that was necessary,” Arms said. “Our biggest complaint is just, ‘Why do we have to pay tolls on roads that are needed?’”

All segments under construction in Harris and Montgomery counties will be tolled; Segment 2 in Grimes County will not be tolled, according to TxDOT.

“I can say that this road in whatever form—toll road or not toll[ed]—has been discussed for decades, and we are just so happy that it is finally coming through,” said Terre Albert, general manager of the Texas Renaissance Festival in Todd Mission. “It is definitely needed.”

Montgomery County commissioners Jim Clark and James Noack voted to oppose a resolution in May authorizing the sale of revenue bonds to fund Hwy. 249. Noack said in April he believed the court should renegotiate with TxDOT on how the road would be funded. However, he declined to comment further now that construction has started.

Once the road is paid for, MCTRA could vote to remove tolls on its part, Riley said. However, he said the county would lose out on substantial revenue.

“I would think different if it was nothing but Montgomery County people paying the tolls; I would not [keep the tolls],” he said. “It’s a choice whether you want to drive on it or not.”