Despite progress toward cleaner air, ozone still a concern for Greater Houston area 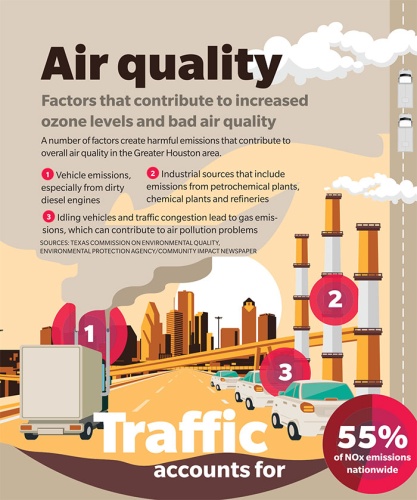 From 2000 to 2016, the Houston-Galveston-Brazoria population increased 44 percent, while ground-level ozone levels improved by 29 percent, according to the Texas Commission on Environmental Quality. Despite progress, Houston is not meeting EPA standards.

“Ozone pollution is still a challenge, because the standard has repeatedly been made more stringent,” TCEQ Media Relations Specialist Andrew Keese said.

Houston-Galveston Area Council experts anticipate, under the EPA’s 2008 standards and based on previous years’ emissions, the EPA will reclassify Houston as “serious” this summer, meaning the region’s air quality has not improved enough to meet EPA rules.

The American Lung Association’s 2018 “State of the Air” report released April 17 ranked the Greater Houston area as No. 11 and No. 15, respectively, for having the highest levels of ozone and year-round particle pollution in the U.S. This is up from No. 12 and No. 16, respectively, in the nation in 2017.

“There are just a number of sources that contribute to our air quality levels in Houston,” she said.

The Clean Air Act, a federal law passed in 1970 to control air quality, makes it a requirement for the EPA to issue standards known as the National Ambient Air Quality Standards for six criteria pollutants, according to the EPA.

Ozone in Texas is measured by the TCEQ’s network of regional ozone monitors, Keese said. The TCEQ uses air monitoring sites across the Greater Houston area—including one at WG Jones State Forest on FM 1488 and one on Kitzman Road in Tomball—to track emissions. While Houston is meeting EPA standards with five of the six NAAQs, the city has never met ozone standards.

Corey Williams, policy and research director at Air Alliance, said although Tomball and Magnolia are not home to many emissions-producing companies, pollution from the southeast area finds its way north.

“Chemical refineries and all that are of course concentrated in the Port of Houston. However, the predominant wind in the area is out of the southeast, which means all that wind is blowing [emissions] up there towards Tomball,” Williams said.

Another factor to poor air quality is increased traffic on roadways, said Alan Clark, director of transportation planning for H-GAC.

“When we adopt a new plan, when we fund new projects—particularly those that are of significant regional impact—we have to perform an explicit air quality analysis, using the TCEQ’s process for measuring emission impacts to show ... that we will continue to be on track to meet the emissions reductions required in that [plan],” he said.

The TCEQ released rules in the early 2000s regarding nitrogen oxides and volatile organic compounds—likely precursors to ozone formation—that have contributed to the decline in ozone in Houston, said Stuart Mueller, operations manager for Harris County Pollution Control Services.

The EPA measures ozone in parts per billion and changed acceptable standards from 75 ppb to 70 ppb in 2015.

The highest TCEQ site reading in the Greater Houston area indicated an average level of 80 ppb and 81 ppb for the 2012-14 and 2015-17 periods, respectively.

Harris and Montgomery counties received an “F” rating from the ALA for the number of high ozone days experienced in the counties from 2014-16.

“Although ozone levels have improved in the region, it’s still not making the grade,” Williams said.

However, ozone is not the only air quality concern. Harris County received a “C” for its number of 24-hour high particle pollution days in 2014-16. Data is not available for Montgomery County.

Localized air quality concerns in Tomball and Magnolia include particles emitted from concrete batch plants, Williams said. The area is home to about a half dozen such facilities.

“[It] is enough for these particles to burrow deep within the lungs and possibly then enter the bloodstream,” he said. “Smaller animals that have increased respiratory rates are more at risk, and that goes for people as well. [Younger] people are more at risk.”

In addition to physical effects, environmental experts agree Houston’s inability to meet EPA standards can also be bad for the health of the economy. As the EPA is working to update its requirements—a process that began in 2015—researchers and companies have to prepare for the newer regulations.

For areas not in compliance with EPA standards—such as Houston—the TCEQ develops a state implementation plan, which is submitted to the EPA for approval and includes a collection of local regulations to reduce air pollution.

However, President Donald Trump issued a memorandum April 12 to the EPA, noting standards have become more stringent, hindering industrial growth. The memo calls for the reform of implementing standards, among other items, to spur economic growth.

“These actions are intended to ensure that EPA carries out its core missions of protecting the environment and improving air quality in accord with statutory requirements, while reducing unnecessary impediments to new manufacturing and business expansion essential for a growing economy,” Trump wrote in the memorandum.

As Houston’s ozone levels have improved due to regulation in place, Whitworth said the region’s inability to meet the standard for ozone proves other solutions need to be looked at.

“We really have to look at just everything across the board,” she said. “Because so much has already been done in industry now, we are looking a lot more closely at our vehicles.”

In addition to the application of air quality rules, Whitworth said residents can carpool to help reduce emissions.