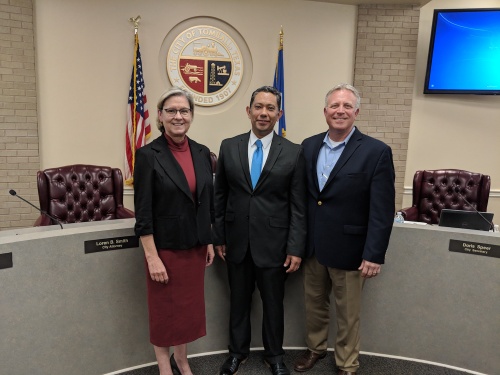 “When we started this process, I’ll tell you that I went into the [hiring] process knowing that we had a good candidate—a really solid candidate here within the city,” City Manager Rob Hauck said. “As I reviewed [the candidates], I realized that David both with his attitude, his aptitude [and] his experience, really rose to the top as far as I was concerned, and it validated for me that we really do have a great candidate here in Tomball."

Hauck said Esquivel endured a similar application and interviewing process as he was put through when preparing to be city manager.

“[David] also went through a process where he spoke with employees as well as community members, and what’s so cool about it is that they validated the process—they validated the selection—and they made me realize that we don’t just have a good candidate here, but we have a great candidate, and we have the best candidate out of all the people that applied," Hauck said.

According to city information, Esquivel has worked in city government for more than 10 years.

Community Impact Newspaper previously reported that Esquivel was sworn in as public works director in Tomball in January 2015. The public works department oversees wastewater, water, garbage, parks and recreation, streets and other utility services, according to city information.

As assistant city manager, Esquivel will share city management duties with Hauck, including overseeing the daily operations of city departments and implementing policies and procedures at the direction of city council members.

“I absolutely believe that you will be a great partner,” Hauck said.