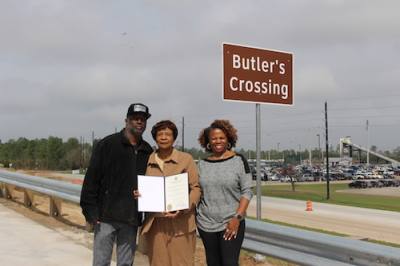 The city of Magnolia and the Greater Magnolia Parkway Chamber of Commerce honor the Butler family at the ribbon-cutting ceremony for the FM 1488 at FM 149 overpass on Feb. 23. Texas Department of Transportation officials said two lanes of the bridge will open Monday., Feb. 26.

After more than two years of construction, two lanes of the FM 1488 overpass at FM 149 will open Monday, Feb. 26, according to the Texas Department of Transportation. The city of Magnolia and the Greater Magnolia Parkway Chamber of Commerce held a ribbon-cutting ceremony Friday morning to celebrate the opening of the bridge.

In a proclamation issued Feb. 13, city officials honored the Butler family—one of the founding families in the Magnolia area—by naming the FM 1488 overpass "Butler’s Crossing." Friday's dedication of the overpass pays homage to the Butler family, specifically Boney “Sonny Boy” Butler, who was one of the oldest living residents of the area before his death in 1989 at the age of 93. Butler—along with his family—is known for assisting travelers as they passed through by giving water to people and horses from the family’s well, according to city information.

TxDOT began construction on the FM 1488 overpass in December 2015. The project provides drivers a direct route across FM 149 and the Burlington Northern Santa Fe Railroad tracks near Magnolia High School.
SHARE THIS STORY

Master Class Cabinets to open in September in Tomball

"This partnership will not only support the TISD students and teachers in their current studies, but will also help in college preparation," said Janna Hoglund, director of the Tomball Community Library.

Taylor Morrison will be building homes at Raburn Reserve, which is under construction at South Persimmon and Hufsmith-Kohrville roads in Tomball.