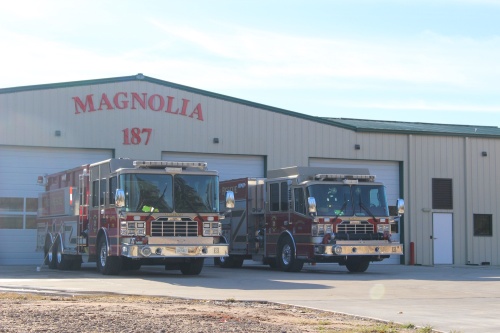 Fire departments in Tomball and Magnolia are working to achieve quick response times despite population and business growth, mobility challenges and limited funding.

From 2010 to 2016, the collective population of the six Tomball and Magnolia area ZIP codes—including the Pinehurst, Hockley and Rosehill areas—grew 18 percent, according to the U.S. Census Bureau.

Gary Vincent, chief of the Magnolia Volunteer Fire Department, said he believes more homes, businesses and vehicles test each department’s ability to serve its respective community. Although development spurs property tax revenue—of which a portion is collected by each fire department—Vincent said his department sees a lag between start of service and fund collection.

“What happens is someone moves into the area, and they are immediately able to call 911,” he said. “But we get almost another year before there’s any property tax generated from that new piece of property. We have a lag time that always makes things a little bit of a challenge in rapid growth areas for government services.”

As a result, fire departments are facing staffing shortfalls and limited budgets with no end in sight for local growth, department chiefs said, and are looking to sales tax and property tax rate increases to help pay for the growing demand for services.

The Magnolia and Klein volunteer fire departments have tapped into sales tax revenue since October 2014 and 2015, respectively, to receive additional funding. Additionally, Emergency Services District 15—which contracts with the Tomball Fire Department to provide services—is proposing a 5-cent property tax rate increase for the May election.

To improve service, the MVFD opened stations 188 and 189 in early 2017 on FM 149 and FM 1486, respectively, to service the district’s northern portion, as well as Station 187 in late January to serve the High Meadow Ranch and Pinehurst communities. Construction of each new station costs about $1.34 million, Vincent said. The department now includes nine stations.

“Trying to improve the size of the department by 50 percent in one shot is a very big challenge,” he said. “Certainly the budget did not increase 50 percent just because we added new stations.”

Despite the new stations, the total number of calls received for emergency services decreased by 1 percent from 2015 to 2016—although call numbers increased in years prior to that, Vincent said. The MVFD responded to 5,214 calls in 2016 compared to 5,264 calls in 2015.

Meanwhile, the Rosehill Fire Department has seen an increase in call volumes. Rosehill’s jurisdiction spans 48 square miles between Telge Road and Hwy. 290. The department, which contracts with ESD 21 to provide fire services and ESD 3 for emergency medical services, responded to 1,180 calls in 2017—a 10 percent increase from 2016, Sulecki said.

“We’re getting busier. We’ve got three new subdivisions going in—1,000 homes each,” Sulecki said, referring to Rosehill Reserve, Bauer Landing and Dellrose. “As soon as they go in, I know the commercial [development will] follow.”

The Tomball Fire Department, which responded to 2,495 calls in 2017, has also seen a growing number of subdivisions in the unincorporated portion of its jurisdiction, Chief Randy Parr said.

“Growth over the last five years has obviously been very significant,” Parr said. “When I got here 13 1/2 years ago, 90 percent of that was covered by cows and oil wells. A lot has changed.”

“We will be asking the folks to let us go to 10 [cents], if necessary. We won’t necessarily go that high. We’re hoping we can go for just maybe a 2- or 3-cent increase,” he said. “The [tax] base hasn’t grown so rapidly as the necessity to put another station in.”

ESD 15 has acquired property near Mahaffey Road and FM 2920 for Station 4, Parr said. ESD 15 funded the labor costs and $4.25 million construction of Station 5, which opened in March 2016 on Telge Road, and plans to do the same with Station 4, he said.

Station 4—which should also cost about $4.25 million—is likely at least a year from opening, should the tax rate increase be approved, Roth said.


“That will get us to where 85 percent of our jurisdiction will be within five minutes of a fire station, and that’s important,” Parr said.

The city has also acquired 2 acres at Stanolind and Hufsmith roads for a future station once utilities are extended to the property, as responding to calls in the northeastern portion of the district is difficult, Parr said. In the city, the department averages a five- to six-minute response. Parr said the department averages a seven- to eight-minute response in the majority of ESD 15 and the northeast portion of the city.

In 2014, voters approved a sales tax rate increase in ESD 10, providing additional funding to the MVFD. Before October 2014, the department collected only property tax revenue.

As each new station means additional equipment and labor costs, Vincent said the added revenue from sales taxes has been key in the department’s ability to service its growing community. Stations can now be manned up to six days per week instead of three days each week.

He said the MVFD is set to receive 39 percent of its 2018 funding from sales tax revenue.

“In the past, we didn’t have enough firefighters to man the fire stations,” Vincent said. “And we still at times do not have all the stations opened and manned because of the labor expense.”

Vincent said the pace of growth in the department is dependent upon available resources, as the funding need persists for additional firefighters. He said he hopes for a 10th station opening, but no specific site plans have been made yet.

Funding is also a challenge for Rosehill Fire Department, Sulecki said. A new station to replace Rosehill’s third, outdated facility near the Showboat Drive-In is planned to begin construction at the west end of the district in two years. Sulecki said ESD 21 has acquired property for the station, which is estimated to cost $5 million to construct.

Despite growth, Sulecki said the district’s contract requires it to respond within 10 minutes 90 percent of the time.

“So far, we’re still able to do that,” he said. “We’d like to have more stations, more apparatus and more personnel, but [there are] budget constraints.t just takes time to get all of that.”

With residential and commercial growth has come additional vehicles and new roadways in recent years. Limited access roadways, including the Grand Parkway segments F-1 and F-2 and the first segment of the Tomball Tollway, opened in 2015 and 2016, respectively.

Sulecki said limited access may hinder the ability of fire departments to respond quickly to incidents.

“We thought [the Grand Parkway] would benefit us, but it really hasn’t come to play. It shaves a minute or two off [response times], but with limited access it causes other issues,” he said.

Multiple nearby roads are also under construction by the Texas Department of Transportation. The tolled extension of Hwy. 249 through Montgomery and Grimes counties, as well as widening projects along FM 1774 and FM 1488, and construction of railroad overpasses in Magnolia are in progress.

Once construction projects are complete, these areas will be ripe for growth, as the Rosehill and Tomball fire departments have already seen with development along the Grand Parkway.