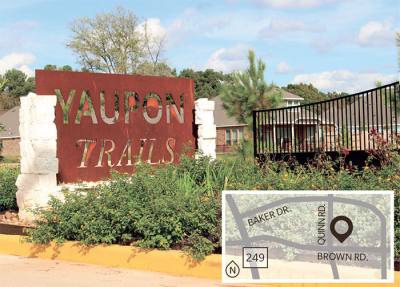 Residential developments slated east of Hwy. 249 in Tomball have caused nearby property owners to express flooding and safety concerns this fall.

With ongoing development and a higher density of homes, multiple residents spoke out during public meetings in October and November about the possible effects of new residential developments within Tomball city limits.

At the Oct. 16 and Nov. 6 Tomball City Council meetings, residents shared flooding and traffic concerns with the council in light of proposals from developers of three subdivisions: The Reserve at Spring Lakes, Copper Cove and Grand Junction.

“I’m not against growth,” Tomball resident Dwight Mohle said Oct. 16 during the public comment period, referring to a third section of homes proposed for The Reserve at Spring Lakes. “I understand growth will happen, but the growth and development must be managed to preserve the character and quality of life of our community.”

The proposed third section of The Reserve at Spring Lakes could yield a higher density of homes—according to a zoning request for smaller lot sizes. Meanwhile, residents said they believe the proposed Copper Cove and Grand Junction subdivisions could bring increased traffic to less-traveled roadways.

However, despite a likely increase in homes and vehicles, Tomball officials said residents’ concerns are well-addressed by development standards.

“Whenever a developer develops, they have to account for all the water. They can’t have any more outflow than what’s already going off that property to begin with,” Mayor Gretchen Fagan said. “All the concrete, all the streets—they have to be able to detain all that water in some way, shape or form.”

While developments are subject to continued discussion and no timelines for construction have been released, plans presented to the council this fall propose 199 new homes in Tomball east of Hwy. 249.

The proposed Copper Cove subdivision, located on the east side of South Cherry Street north of Agg Road, will feature 52 homes, according to city documents. A timeline for construction is not available, as development plans are ongoing, Benson Development LLC developer Will Benson said.

The community is expected to resemble the Yaupon Trails development, also an ongoing project by Benson Development LLC.

Benson is also in the early stages of planning Grand Junction, a development slated for the south side of East Hufsmith Road between Lovett Street and Hospital Road, according to city documents. The development proposes 48 homes. No timeline has been released for construction of the development.

As plans are preliminary, Benson said he cannot comment on the two developments until plans are finalized.

In addition to proposed developments, construction is ongoing in existing developments with a multitude of home sites available for purchase.

“We were attempting to get some lots just less than an acre, but that’s all up in the air right now,” Allen said. “Our sales have been not what we expected, and that’s one reason we’re looking to get into a new [smaller acreage] market.”

Several property owners in Tomball claim new developments could increase the chance of homes and nearby properties flooding.

The original plans submitted for the Oct. 16 City Council meeting proposed 99 new homes in a third phase of The Reserve at Spring Lakes; however, Allen said he has pitched revised plans proposing fewer homes to existing homeowners in the subdivision.

As the third section abuts a portion of the 100-year floodplain along Spring Creek, according to a map from the Harris County Flood Control District, the requested zoning change to accommodate The Reserve at Spring Lakes triggered multiple public comments from residents and local entities.

“You’ve doubled your residential density—which is going to put more traffic on Zion [Road], plus there’s going to be more [water] runoff,” said Michael Young, president of the Tomball Gun Club, located east of The Reserve. “[Our concern] is the potential increased flooding across our property and the potential flooding for that area.”

Although Allen said The Reserve did not sustain flooding during Hurricane Harvey in August, nearby property owners said the area sees major flooding with each heavy rainfall event.

“This section of land has flooded three times in the last two years,” Tomball resident Ellery Howard wrote Sept. 28 in a public comment form to the City Council. “I have witnessed many other floods of this area in the 35 years that I have lived here. Development will exacerbate the current flooding problems.”


“A lot of it’s a perceived issue,” he said. “What a lot of people don’t hear or don’t want to hear is when a developer goes in and does a subdivision, he has to account for the water that he generates.”

Fagan said the city has worked diligently to complete drainage projects, reducing flooding effects within the city’s jurisdiction. The city has spent more than $23 million since fiscal year 2011-12 on capital improvement projects to mitigate flooding, according to the FY 2017-18 budget.

“It’s so much money, and you can’t see it. [Drainage is] not a flashy project, but it makes a big difference when your house doesn’t flood and it has in the past,” she said. “We know growth is coming, so we can either let it happen to us or we can plan ahead for it.”

Fagan said she believes Harvey, which brought about 30 inches of rain to the Greater Tomball area across four days in late August, proved the city’s flood mitigation efforts successful, leaving little reason for residents to be concerned.

However, portions of the Greater Tomball area, including areas near Spring and Willow creeks, did flood during Harvey. Tomball also saw major flooding in April and May 2016 in areas near Spring Creek. According to the HCFCD, Tomball received 10.6 inches of rain at Hwy. 249 and Spring Creek from April 17-21, 2016.

“When we had Harvey and we didn’t see any [major] flooding here in Tomball, I think that spoke well to what we have done and the millions [of dollars] that we have spent on drainage over the last 10 years and the drainage that we’re still working on,” Fagan said.

Residents said they believe outlying roads, such as Hufsmith, Zion and Ulrich roads, will likely bear the greatest increase in volume.

Traffic on these roads has already seen an increase in the last five years, according to traffic counts from the Texas Department of Transportation.

Daily traffic increased about 33 percent between 2011 and 2016 at the east end of Zion Road but held steady along Ulrich Road, according to TxDOT. Similarly, a daily average of 3,989 vehicles passed through the intersection of Hufsmith Road and Cherry Street in 2016, a 12 percent increase from the count in 2011, according to TxDOT.

Since 2011, new homes and roadways have been built. Residential developments, including Raleigh Creek and The Reserve at Spring Creek, as well as major thoroughfare projects have opened during that time.

The Tomball Tollway, the tolled portion of Hwy. 249, opened to drivers in 2015, and Brown-Hufsmith Road was extended west, providing a direct route for drivers between FM 2978 and Hwy. 249 in the northern portion of the city.

“With the toll road now coming through, that alleviates some of our traffic because they’re on the toll road now,” Fagan said. “Once the [toll road] came in, it alleviated some of that [traffic] on Business 249 as well as I can now get straight to Brown Road if I need to.”
SHARE THIS STORY